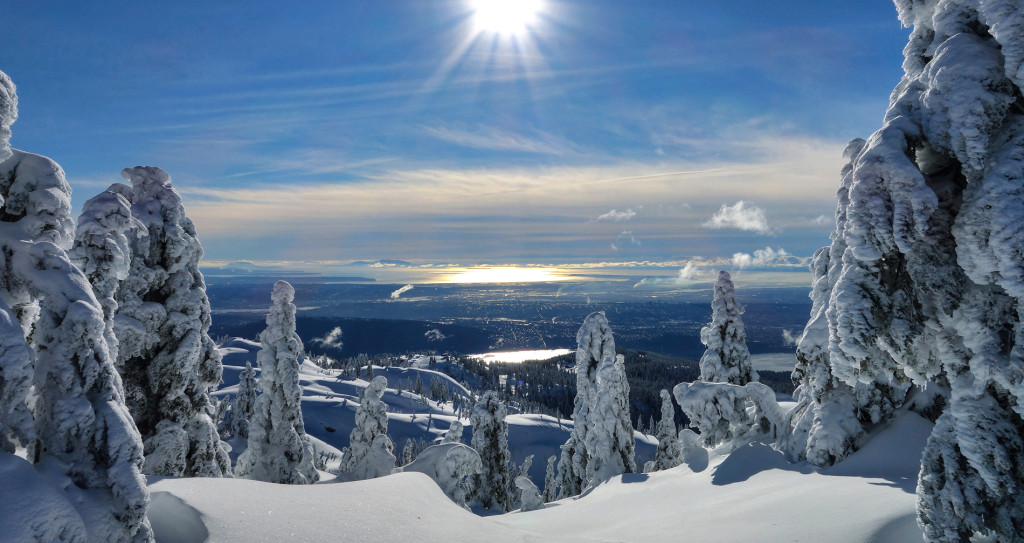 The second peak of Mount Seymour is the last peak before the main summit in the sequence of bumps starting from the parking lot. Unofficially known as “Second Peak” or “Second Pump”, the BC Provincial Government is in the process of renaming it “Tim Jones Peak” after the long time Team Leader of North Shore Rescue, who passed away on January 19, 2014 while hiking on Mt. Seymour. BC Parks and the BC Government have already approved the placement of a memorial plaque, a new SAR helicopter landing pad, and the placement of a rescue cache on its summit. For more information, please follow the facebook page.

This was a solo snowshoe up Tim Jones Peak (aka Second Peak) in Mount Seymour Provincial Park. The weather was fantastic, the trail was somewhat heavy with traffic, and the views were beautiful. This trip was shortly after our first heavy snowfall on Mt. Seymour. This is an easy to moderate hike/snowshoe behind the Seymour ski hill with great views of Vancouver and the North Shore mountains. 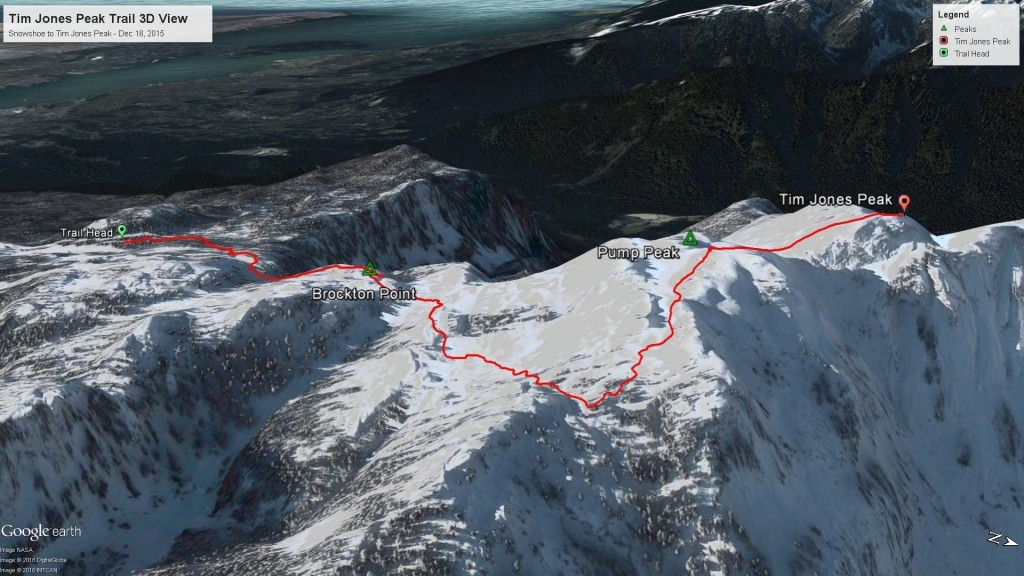 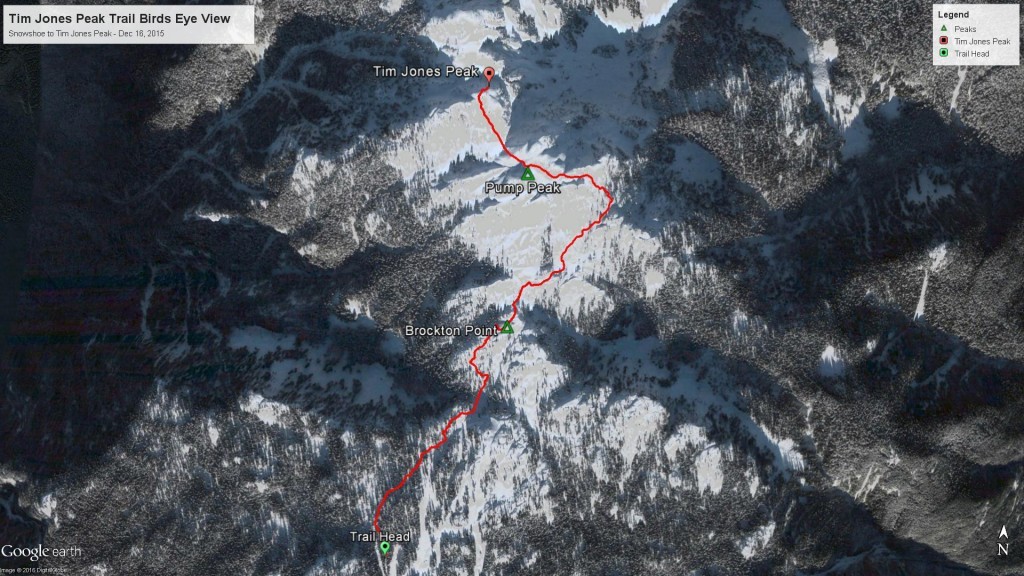 Despite a formerly temperamental freezing level, winter has hit Seymour very nicely as of late. Admittedly, I was a little surprised to see the abundance of people on a Wednesday, soaking up this wave of powdery joy. 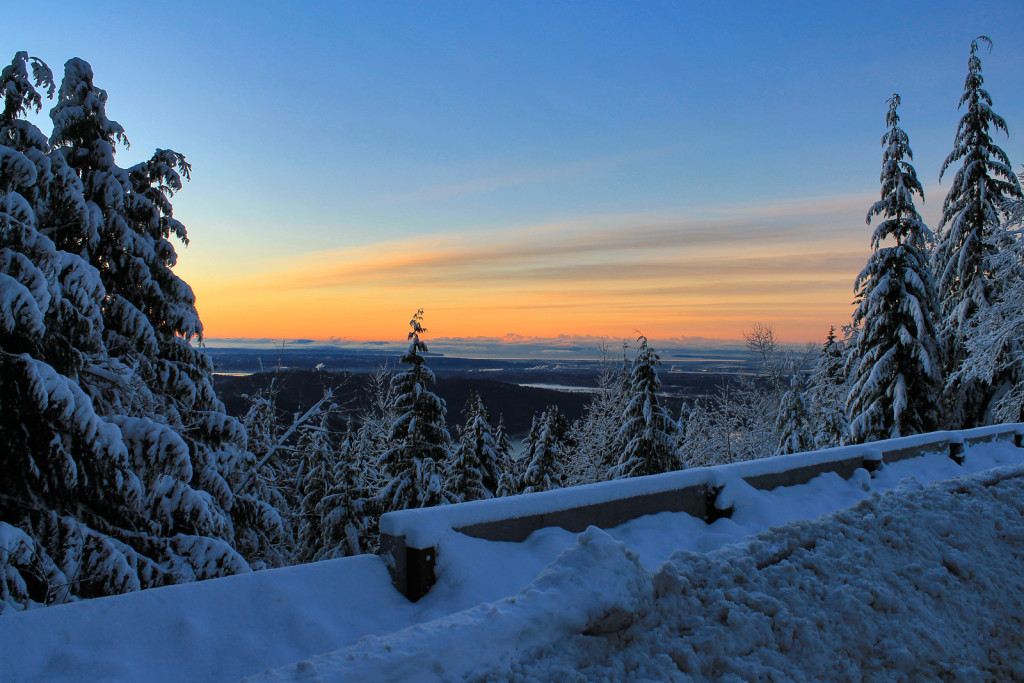 I saw traction of all sorts: yak tracks, microspikes, crampons, snowshoes, skis (with and without skins), and my personal favourite, the magic carpet – this inspired me to butt-slide as much as possible without ruining ski tracks during my descent.

Temps were well below freezing in the morning. I realized about 3 or 4 pictures in, condensation formed on my DSLR filter and froze. No big deal, I had my P&S as a backup. I assumed the freeze would melt off once it warmed up and I was exposed to sun. My bladder also froze within the first half hour; my fault for not consistently sipping water.

My plans changed a few times throughout the course of the day. First thing in the morning, I decided I would snowshoe to Brockton Point and head back. Brockton Point came and went, and I completely missed the ‘summit’ post – I realized after I got home, I walked right past the sign and the trail followed up and over Brockton. 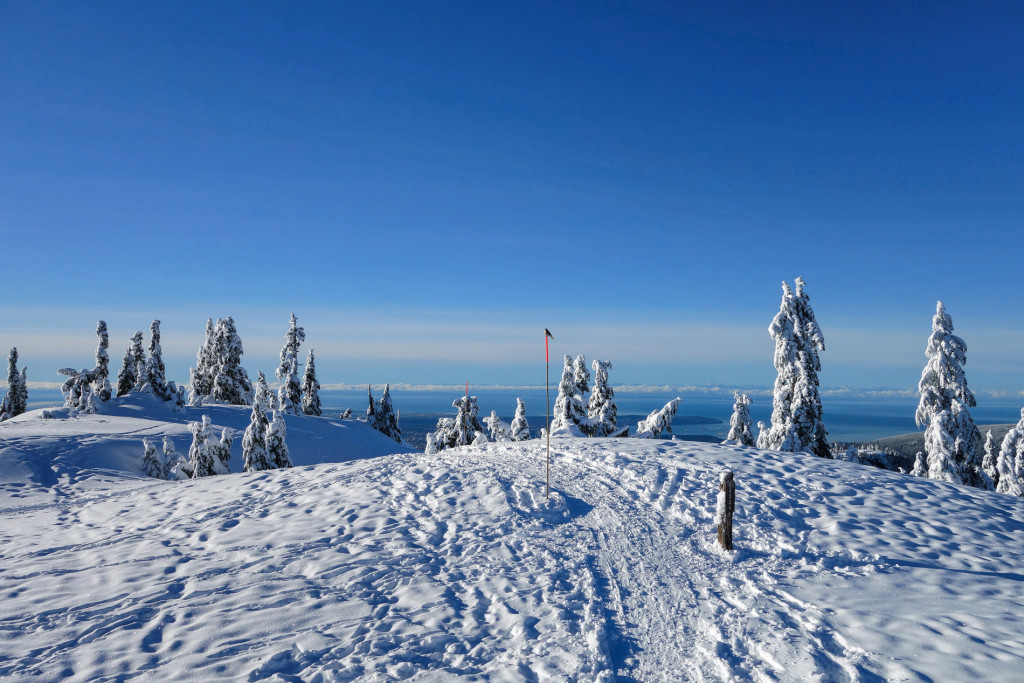 Next, I decided to head for First Pump and make it my destination of the day. Somewhere along the trail, I missed the turn-off for the summer route which was still open for use, and took the winter route instead. During my ascent, I was slightly confused by the incline in a few sections. I was down for a challenge and made a few steep tracks heading up. 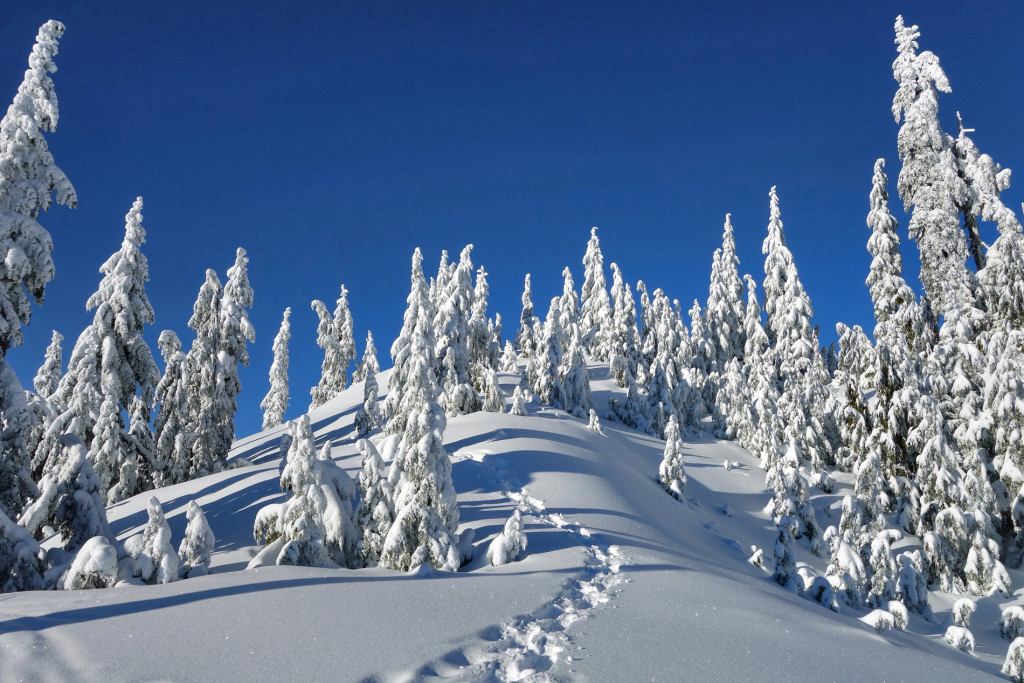 Ryan was on Seymour the night before and gathered some info on trail conditions and advised there was no track past First Pump. With this in mind, I noticed I was following fresh snowshoe tracks all morning – hoping for a track to First Pump. Near the switchbacks below the first pump plateau I ran into the snowshoer heading back. He advised there is now a track to First Pump and he did not go beyond, and there is no visible track to Tim Jones Peak (Second Peak).

At this point, I took a break for a morning snack and doddled around to some viewpoint-ish areas for pics. 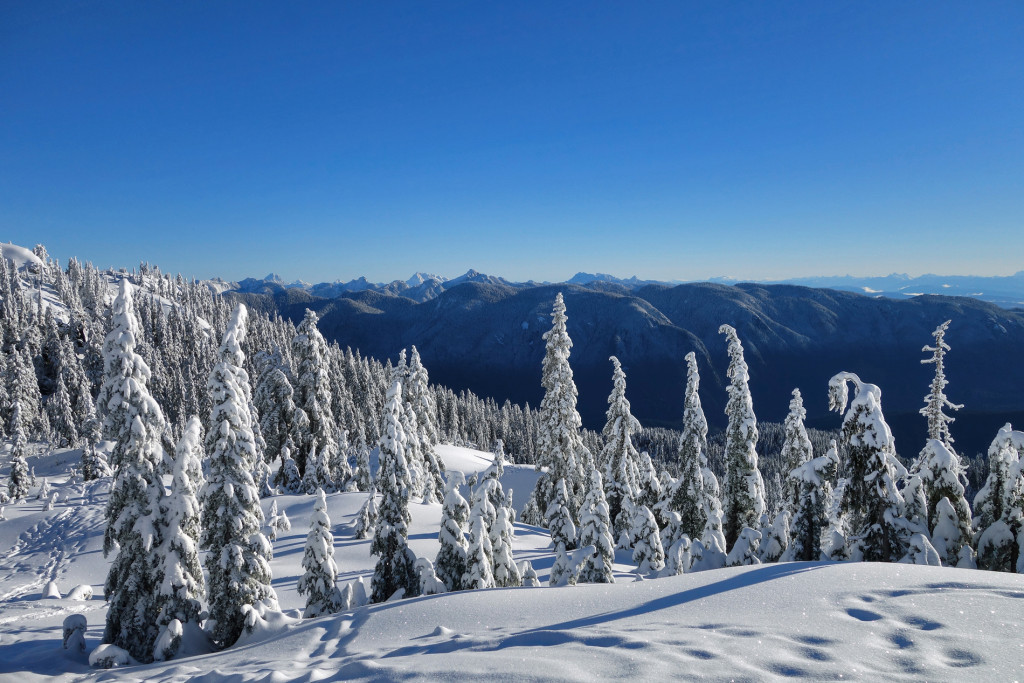 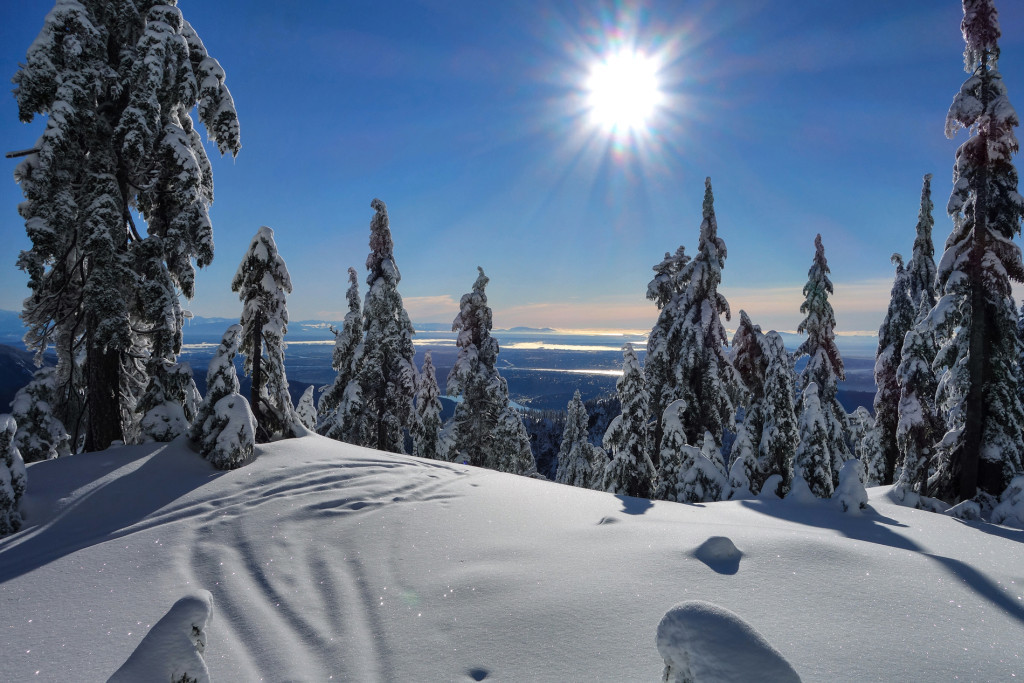 Lower down, I saw another snowshoer coming up the trail. This snowshoer passed me as I picked up the trail and continued to First Pump. 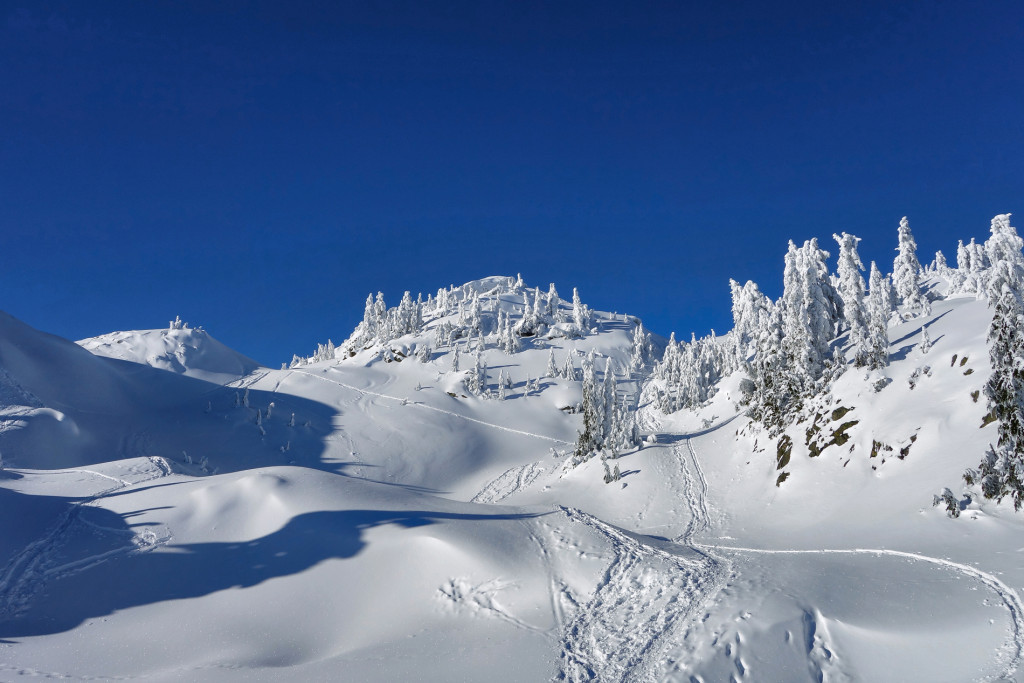 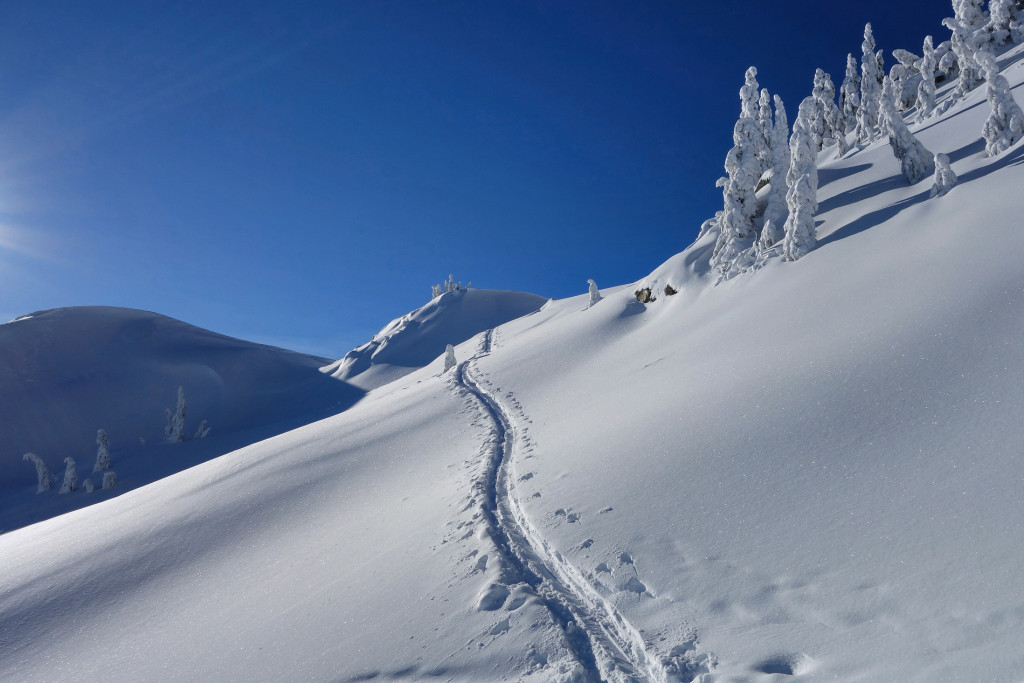 When I arrived at the plateau below First Pump, I changed my mind once more and decided to head for Tim Jones Peak. The views were fantastic with some untracked snow. 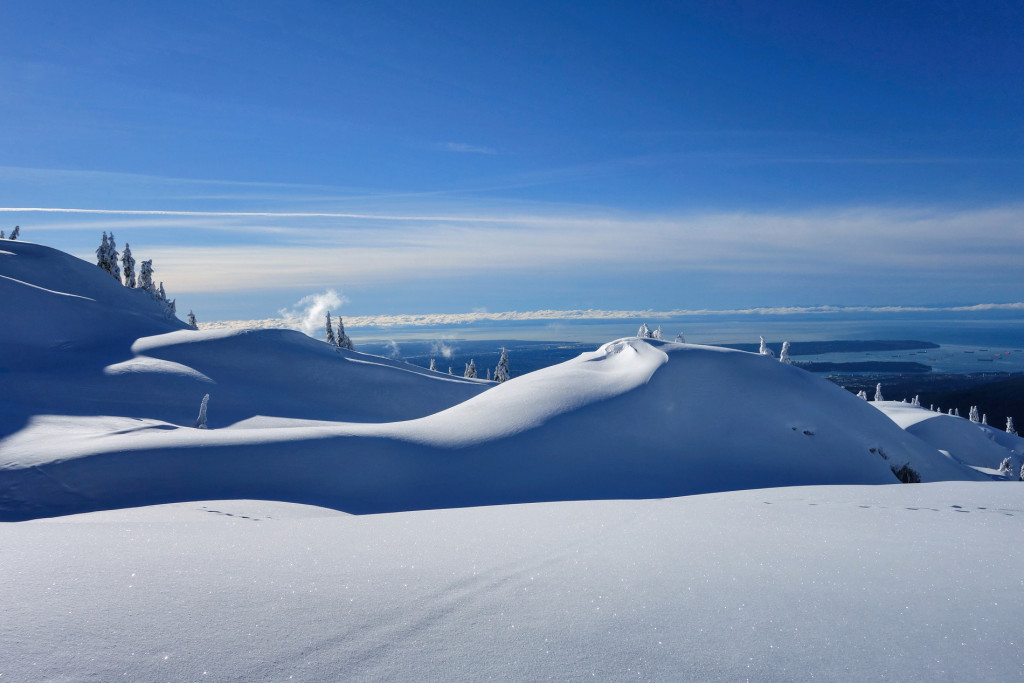 I dropped down the col between First and Second Peak and contemplated the steep gully up to Second. Extremely indecisive at this point, I decided I wasn’t feeling it and thought to head over to First Pump. When I got to the top of the col, I looked back at Tim Jones and thought, ‘I’ve never been up there, I may as well check it out’. I dropped back down the col and ascended the gully. It was much easier going than I anticipated and the snowshoer who had previously passed me left a decent track. The details of my being indecisive may be senseless, but I’m so used to following a laid out plan for the sake of good blood sugar management, that when I was able to figure out my day as I went a long, it felt like a novelty.

I lingered a while and contemplated the Mt. Seymour summit. Ultimately, I decided to stay put and enjoy the views from Tim Jones Peak. Despite my ambiguously planned day and some unnecessary elevation gain and loss, my blood sugars were fantastic. I stayed on the summit for some time and enjoyed the pure mountain bliss. 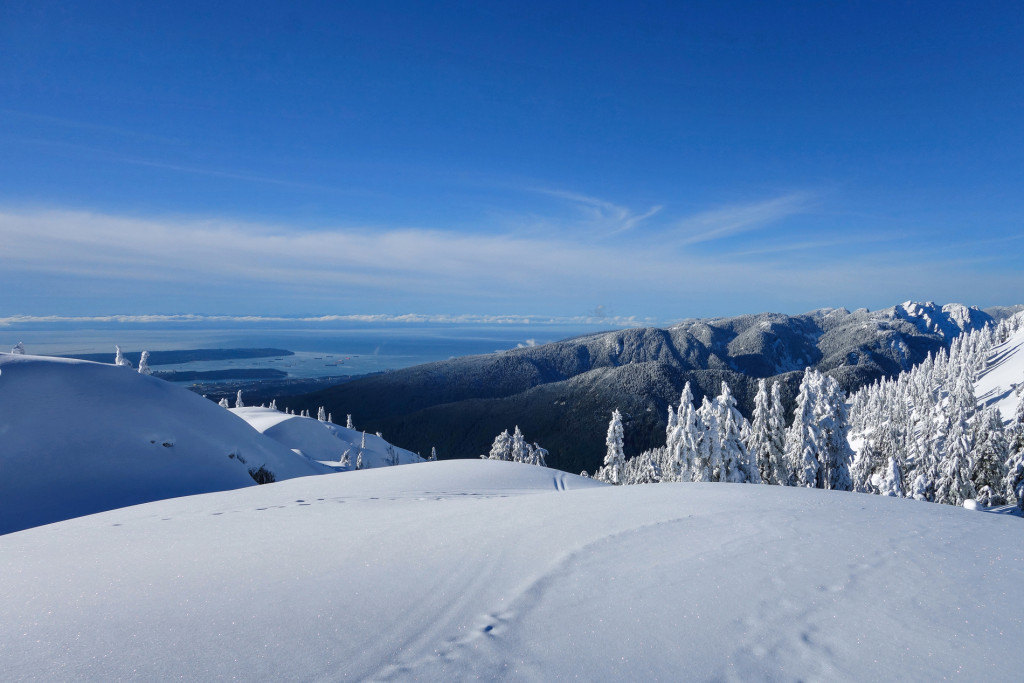 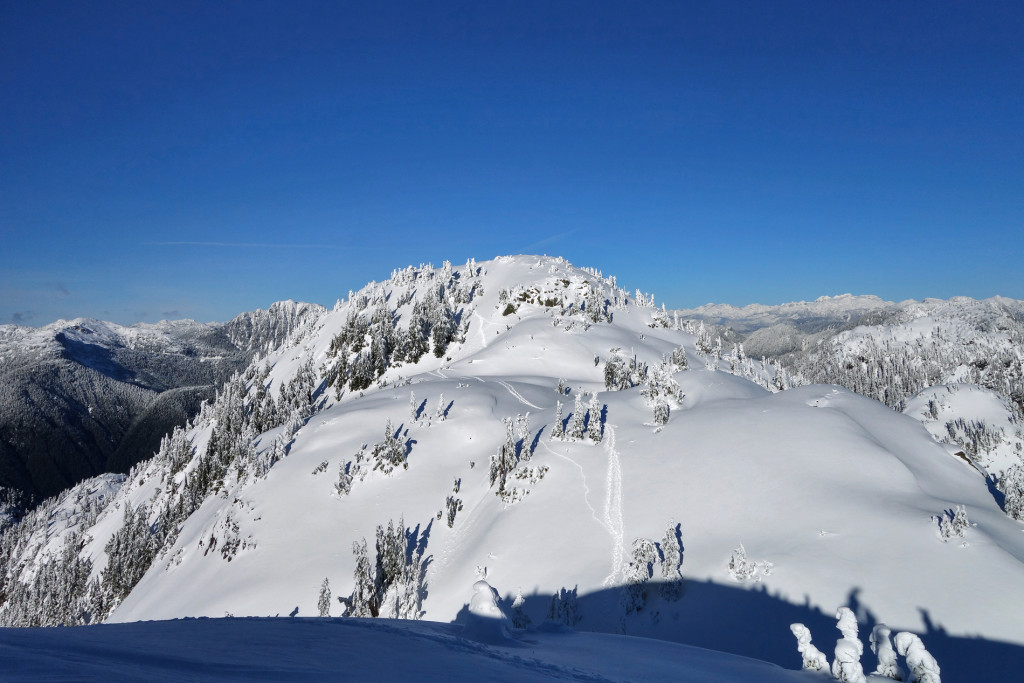 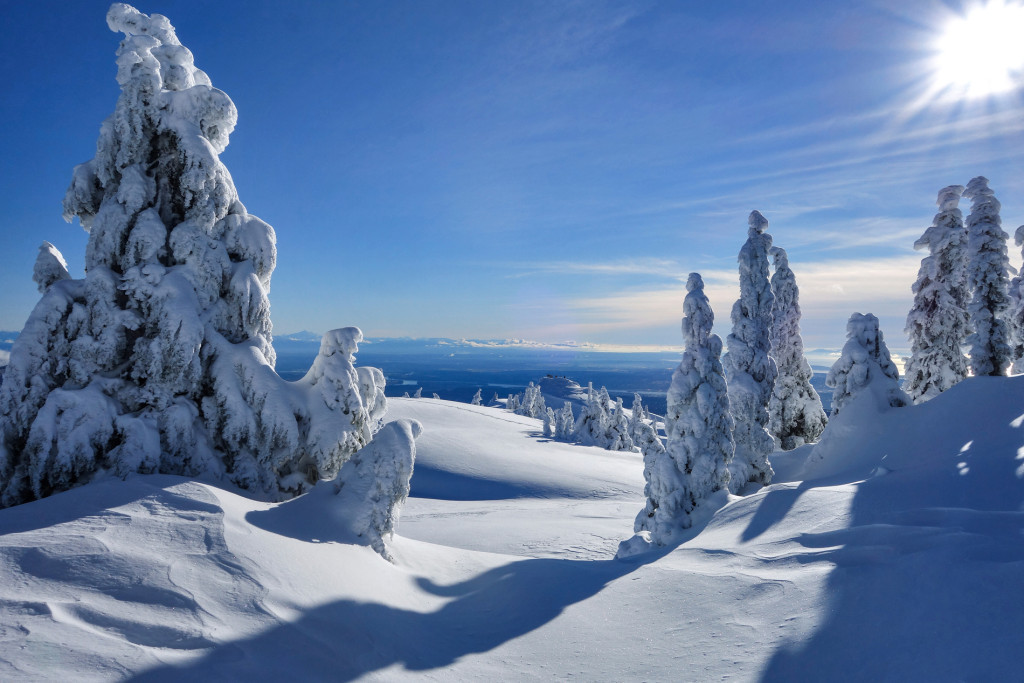 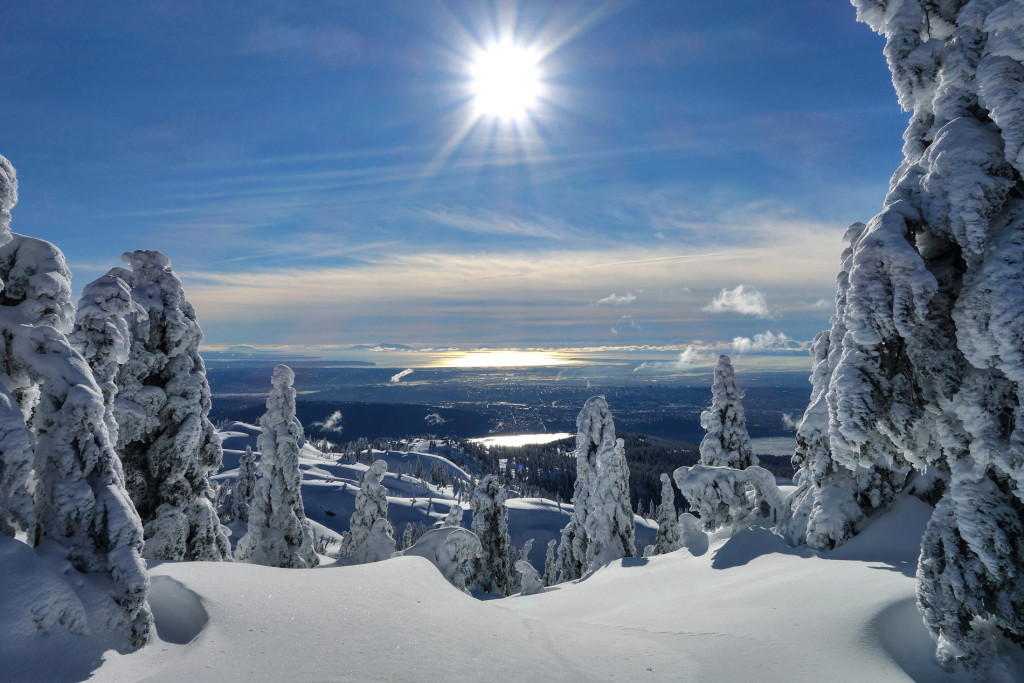 I retraced my steps and headed back to the truck. 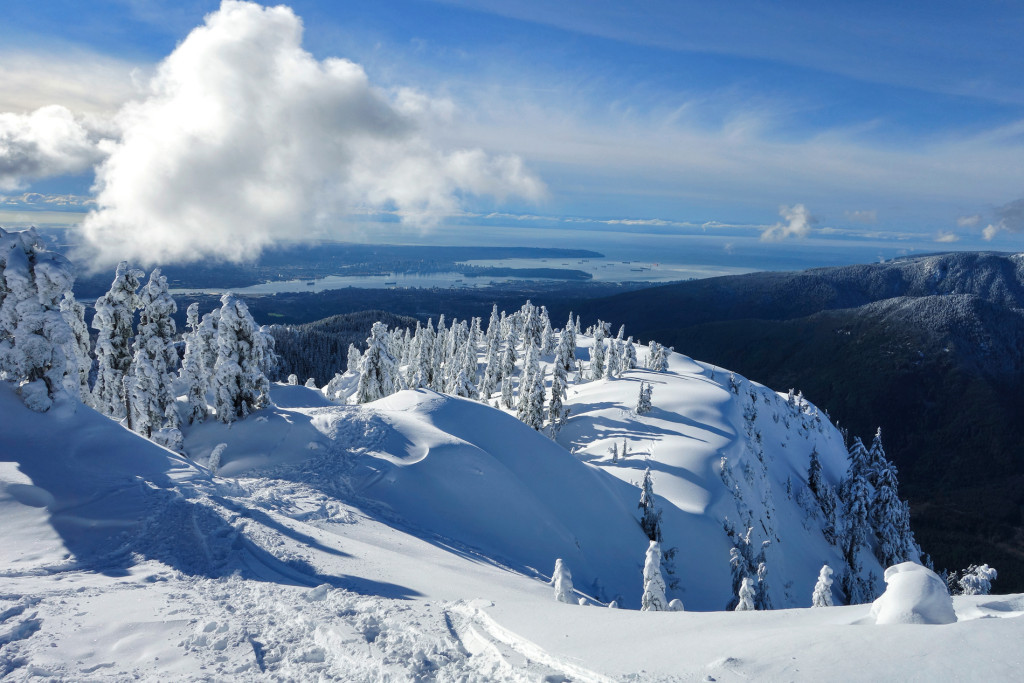 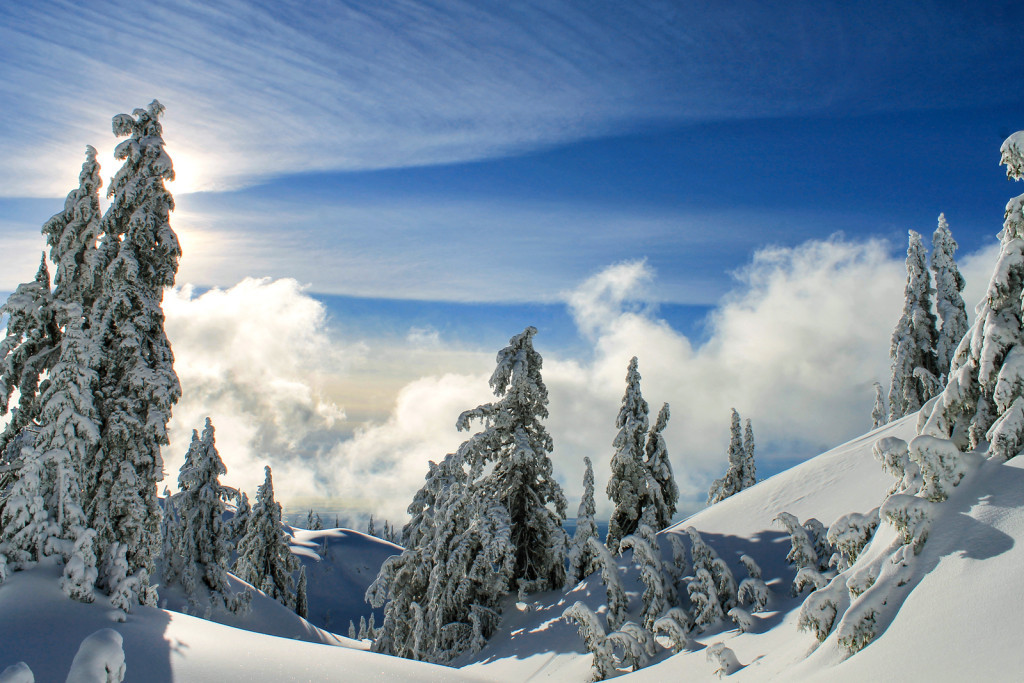 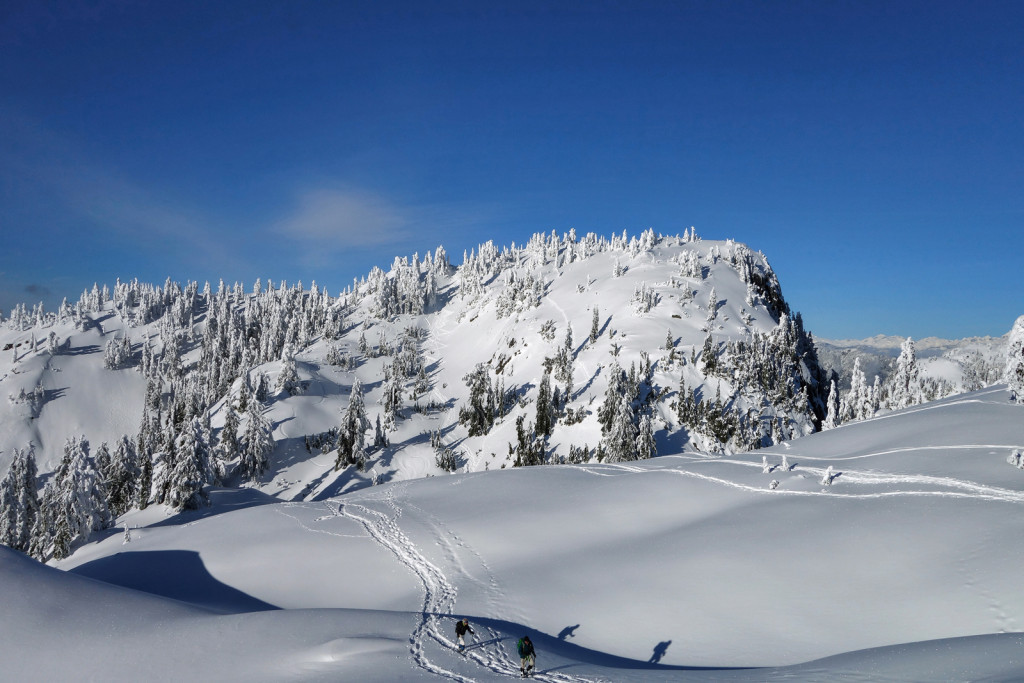 As always, Seymour delivered beautiful views. It was a good day not to be trapped indoors.

I reduced my basal rate to 50% and started my day with normal (6-7mmol), steady blood sugars. I ate a few Fruit 3 bars and ShotBloks to keep up my energy levels and to avoid low-trending blood sugars. Once the sun warmed up and thawed out my water bladder tube, I stayed hydrated by constantly sipping water throughout the day. There were no unusual readings or moments in terms of diabetes management.