Philosophy of a Social Media User

It’s taken the better part of a school year to figure this out; I’ve realized my time isn’t as abundant as it was when I was 18 years old.

My adventures and, subsequently, my blog entries have slowed down. I’m allocating much of my time into papers, exams, projects, and research. I’ve given up numerous weekends to these things and, collectively, I think it has taken a toll on me. I was of the mindset that school would be a Monday – Friday gig and I could continue doing what I do every weekend; spend time outside. Instead, in order to stay on top of things, I’ve had more ‘inside’ days than I’m happy to admit. I realize there are two reasons why this has become troublesome:

If you follow my site, you’ll know I’m an avid social media user and I (used to) post content regularly. Social media sites were a positive resource where I hoped to inspire others and be inspired in return. In recent months, my attitude towards social media channels started to change. My Instagram and Facebook accounts were becoming a source of frustration instead of motivation. Rather than a helpful tool to share and see uplifting content, social media was becoming a burden that was causing negativity. Why was something with such potential failing to live up to the hype? Scholarly research on different aspects of social media largely focus on the positive notes and benefits; a lot less is known about the dark side of social networking sites and the negative outcomes from engagement [1].

Social media channels provide copious amounts of potentially useful social data. These tools allow easy access to real-time information about the activities, events, and conversations happening across diverse social networks. This new inundation of social information has provoked a new phenomenon referred to as ‘Fear of Missing Out’, commonly known as FoMO [2].

FoMO is defined as a form of social anxiety – a compulsive concern when one might miss an opportunity for social interaction, a novel experience, or any other satisfying event. It is a compulsion, distinguished by the impulse to stay connected with what others are up to [2, 3]. “It begins with a pang of envy. Next comes the anxiety, the self-doubt, the gnawing sense of inadequacy. Finally, those feelings fizzle, leaving you full of bilious irritation.” [4].

For a while now, my social media channels have lead me to feel pressured to produce great content. Here’s a quick rundown of what happens: I head out for a hike – whatever and wherever I can squeeze into my schedule. During the hike, I feel obligated to spend time looking for a perfect social-media-worthy shot, rather than enjoy the experience for what it is. After the hike, I come home and open up a social media channel to post and browse through. During my browsing, I often perceive everyone, everywhere is reaching more epic vantages than myself. This overrules the reasons why I connect on social media in the first place.

I originally turned to social media for inspiration, trip ideas, terrain/trail condition updates, and more. I also use it as a subset of my website to inspire type 1 diabetics – the main reason for creating my blog. When did this change? It’s possible I feel like I’m missing out on things because I no longer have as much time to get outdoors and complete the sort of trips I’d like. Or, more likely, I spend too much time on social media.

Aside from experiencing FoMO, there are several other reasons why I feel pressure on the social media front. My short, medium, and long-term career goals involve engagement with the outdoor community. Social media is a cost-efficient and effective way to measure engagement; the more followers and likes I have, the more people are engaging in what I do. It made perfect sense until social media became ‘technical’.

I’ve read various reports and articles, which now seem comical, about how to grow your social media following. My first impression: brilliant! I’ll carry out the suggested steps to grow my accounts. In addition to these tips, I’ve observed people seem to engage more when I post pictures of summit views, Howe Sound vistas, and pictures of people. They dislike concise captions and enjoy vain, obscure, repetitive quotes about life and experiences. Consequentially, I started planning my trips based on views that would give me the best social media engagement, and not based on where I truly wanted to go. I spent a good chunk of time in the sea-to-sky corridor in the past few months because that’s where the ‘money shots’ were. In addition to changing the way I explored the outdoors, I wound up spending five to ten minutes each day liking dozens and dozens of random outdoor pictures, and using copious amounts of #hashtags and @mentions within my own posts – because that’s what I was supposed to do to increase engagement.

Below are some photos I collected through one channel of social media (Instagram). Click on the photos and read the captions for my ideas/opinions on how these users, along with so many others, have similarly fallen under the social media trap: 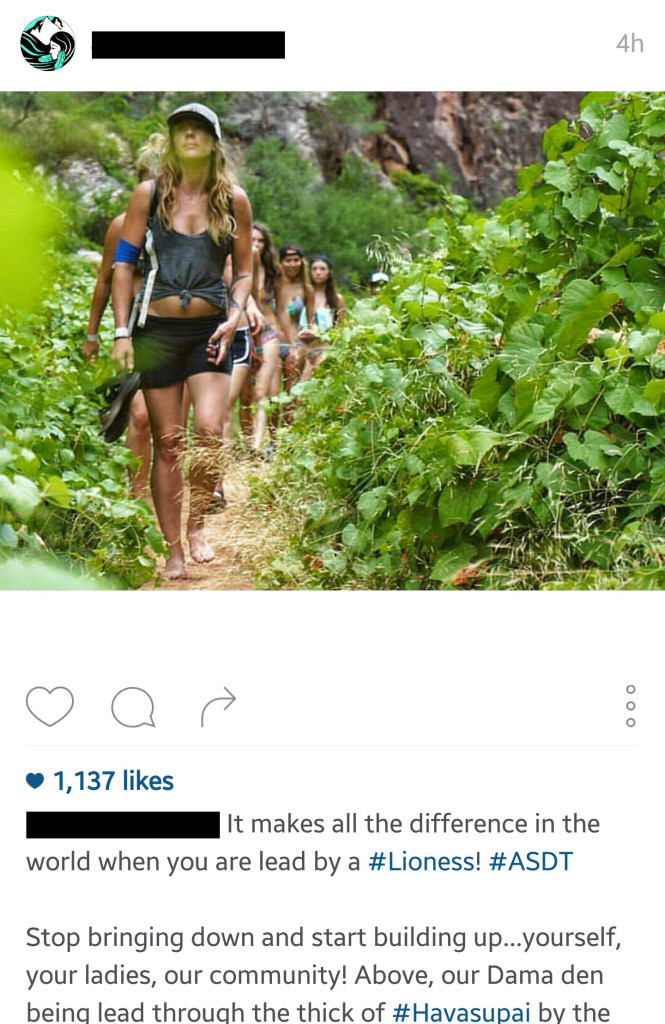 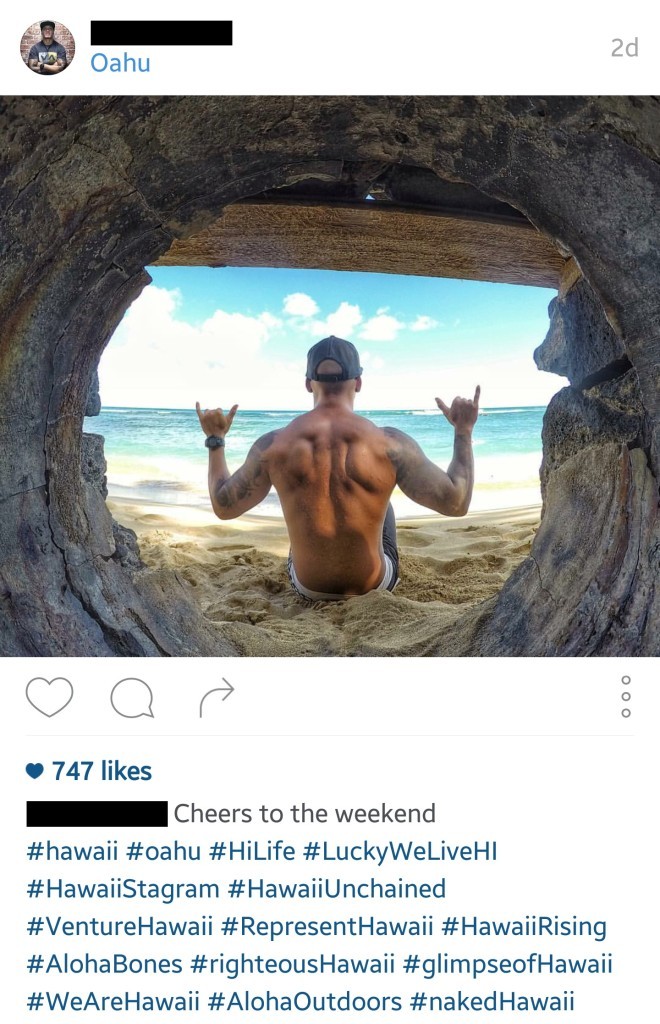 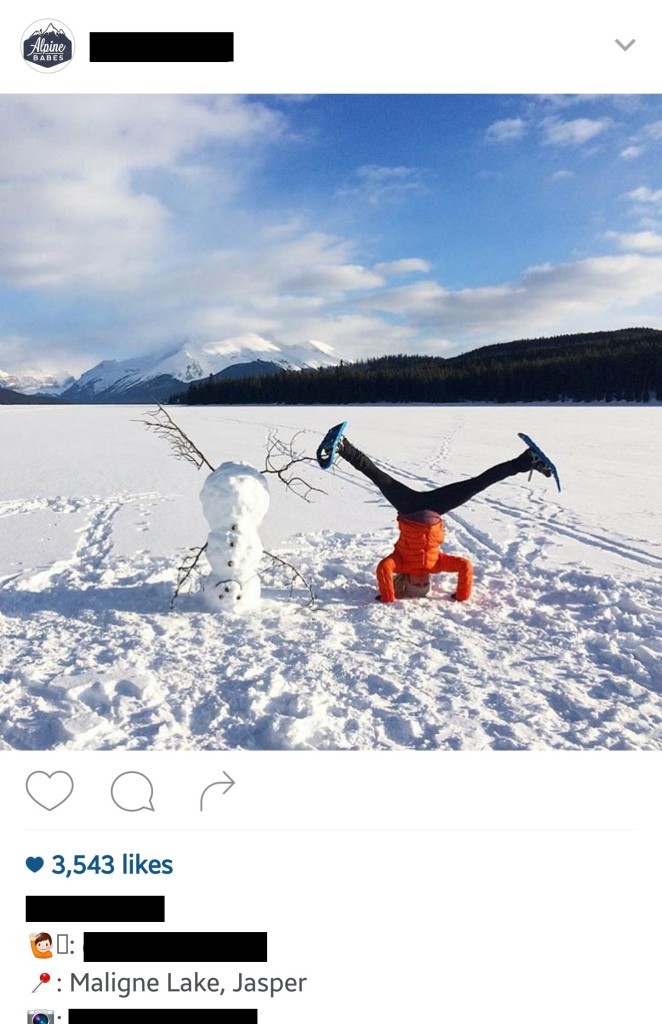 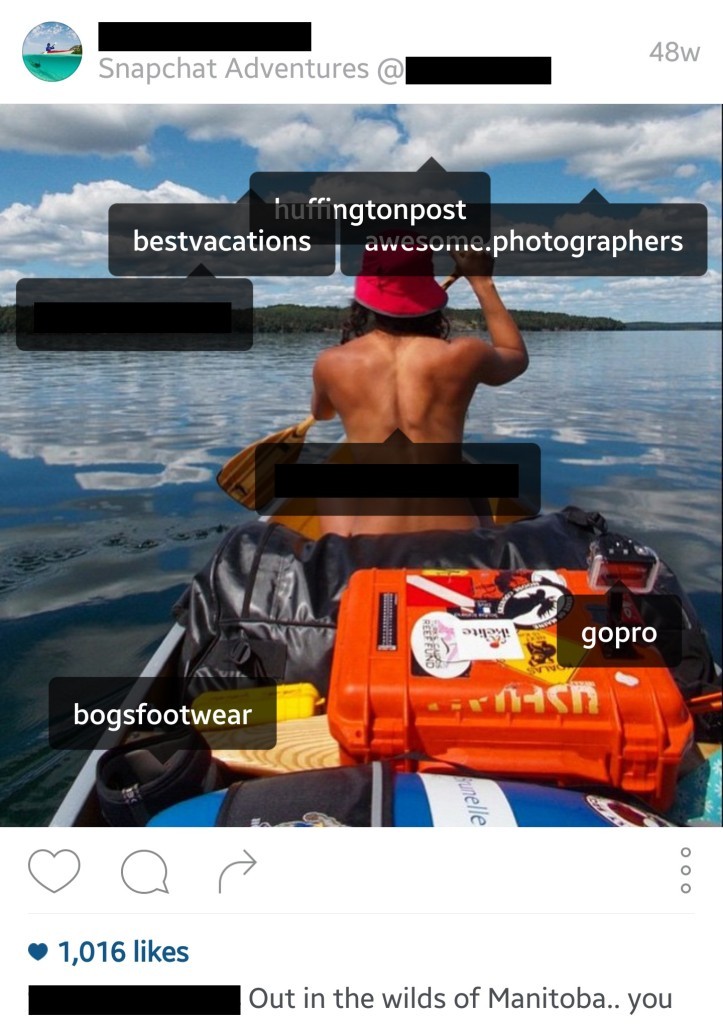 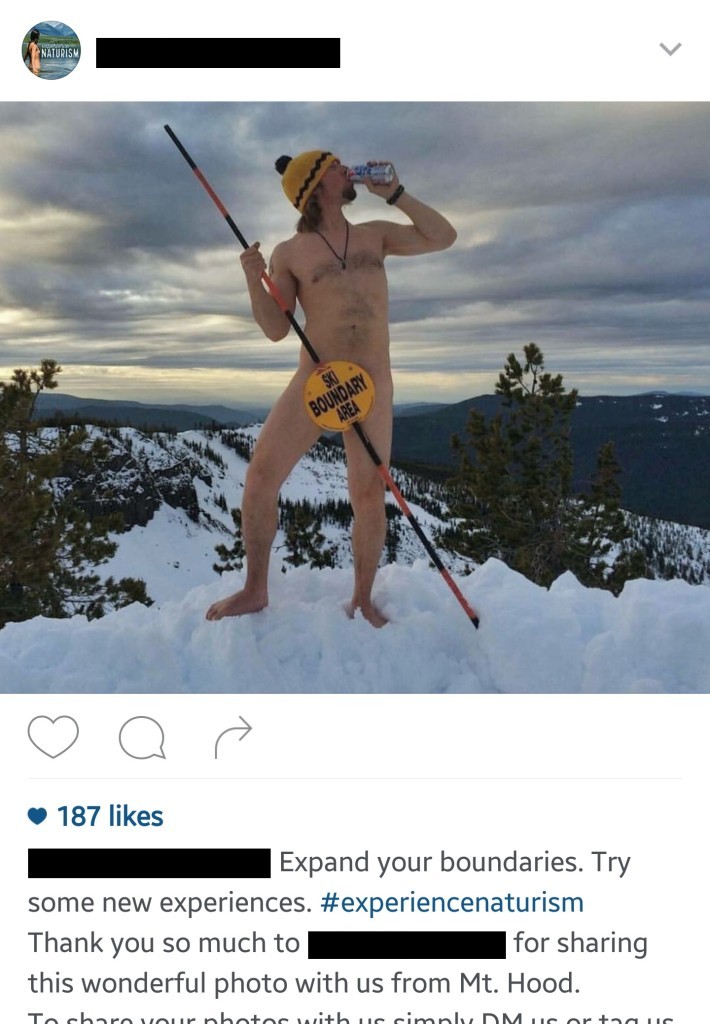 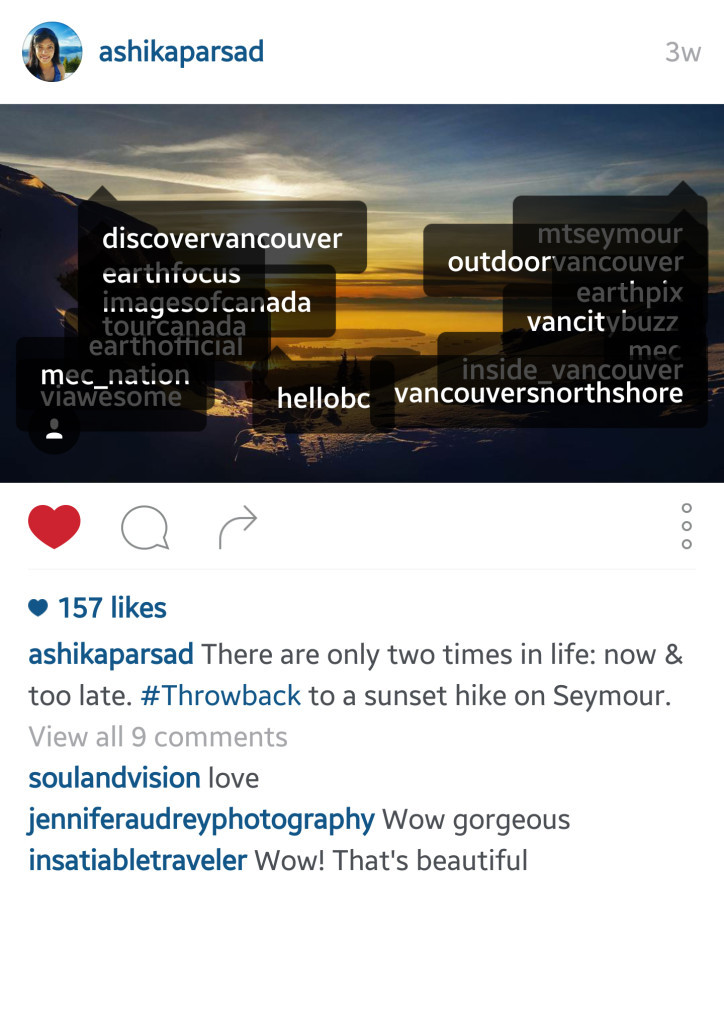 There’s nothing wrong with posting pictures to advertise yourself as long as your motives are clear. There are dozens and dozens of users I love to follow because their online enthusiasm and openness shine bright. A *few* people I enjoy following are Solana Klassen, Erik Hansen, Sarah Hart, and Steve Richert. Their messages are simple and their energy is contagious. When flipping through their pictures and/or reading their posts, I can see their enjoyment for what they do and not for how they benefit from posting.

I recently started questioning: why? What’s the point and how is this beneficial? Why do I want to be noticed? I was getting a decent amount of engagement and my followers grew noticeably, but why do I really care about the likes I get on my pictures? How does it serve me? And more importantly, who are these people? With the array of reports and articles on how to grow your social media accounts that are widely available online, how do I know the likes I get are real/authentic? How do I know they’re not like me and only liking pictures in attempt to grow their audience? Coincidentally, I feel less authentic.

When I started wondering why, I realized I’m a paradox. I have a growing hate for social media, but I use it regularly. I want engagement, but question it when it comes my way. I want to inspire people through simplicity, but I produce grandiose content. I want to be known as an authentic person, but my motives have become spurious.

To explore my thoughts about social media influences and the direction I seemed to be headed, I researched the negative effects of social networking sites. Peer reviewed studies suggest there is a negative correlation between the amount of time a person spends on social networking sites and their quality of life. The amount of time spent generating content and managing multiple accounts may explain this link [5]. Social media relations are linked to reduced self-esteem, cognitive overload, and feelings of distress. Depending on the type of interaction used: relational, communicative, or informational, more frequent interaction is linked to greater distress [6]. Other studies support that more frequent use of social networking sites are associated with a significant decrease in well-being. This involves linking to two separate elements of self-assessed well-being: how people feel moment to moment and how satisfied they are with their lives [7]. Generally speaking, research shows that social media users can end up feeling inferior after spending time on social networks. Please note, as with many peer reviewed studies, limitations and future research directions have been established for all of the above. 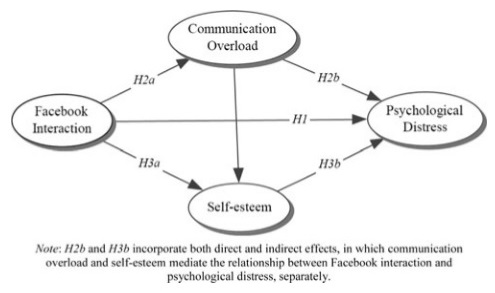 I’ve been thinking back to why I decided to write (see the about me section of my blog) and share my trips and details with the world. I originally started hiking solely for the enjoyment. I was both intrinsically and extrinsically motivated. I was motivated to physically push myself, acquire new skills, and learn how to move on various forms of terrain. I did it for the sense of accomplishment, goal achievement and health benefits of aerobic exercise. On the flip side, I enjoyed showing others what I can do with a chronic condition and with no athletic background (in hopes to inspire other type 1 diabetics), and I enjoyed showcasing pictures of the places I’ve seen.

In the past, a giant tree in the midst of a second growth forest excited me. Sub-alpine meadows and lakefront tent spots below tree line were as stunning as ones with majestic views found above tree line. Until recently, I never felt obliged to spend time in the mountains and I never sought validation from others.

People are social creatures and that is a big part of why we seek out interactions [8]. In the past, those needs were met online via MSN Messenger, MySpace, etc. Currently, we use Facebook, Instagram, Snapchat, and other networking sites. Eventually, new social networking sites will emerge and users will have to rebuild their following on a new platform. Social media sites have a shelf date [9]. When users lessen and overall engagement declines, what will I have left? I will have an informative and hopefully inspirational website/blog, and perceptive ideas that don’t involve validation from others. The main idea here is I will have other means to sustain my ventures when social media falls.

I love sharing my outdoor experiences with the world and I will continue to do so in a slightly different way. I plan to focus less on what I may be missing out on and more on what I’m able to do with my time. To start, I’ll be spending less time on social media; in order to achieve this, I’ve shut off notifications and unfollowed a number of pages and accounts to help de-clutter my feed. I’ll be posting less frequently and using fewer hashtags and @mentions because I’m still not sure it serves a purpose. I’m working on refocusing my trips and plans to areas I’m interested in exploring, not just the ones that offer epic views for others to virtually ‘like’. These steps should help decrease the effects of FoMO and maintain personal well-being in an inflated social world in which users are expected to engage, share, and like more and more.

5 Comments on “Philosophy of a Social Media User”