Ryan and I planned for either a long day trip or a short hike, weather pending, somewhere along the Downton Creek road. With forecasts showing either rain or snow in most areas, we decided conditions on our drive up would determine what we would hike: Viola Lake.

Viola Lake is a gem of a lake reached by crossing an old cutblock, subalpine forest, and alpine meadows. It offers views of glaciers and steep slopes of surrounding peaks. 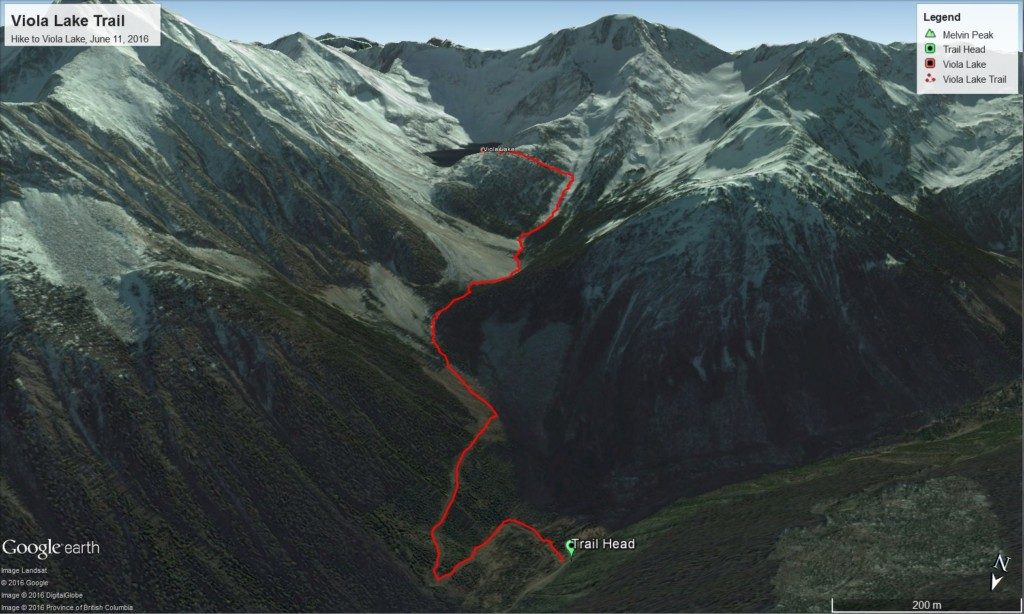 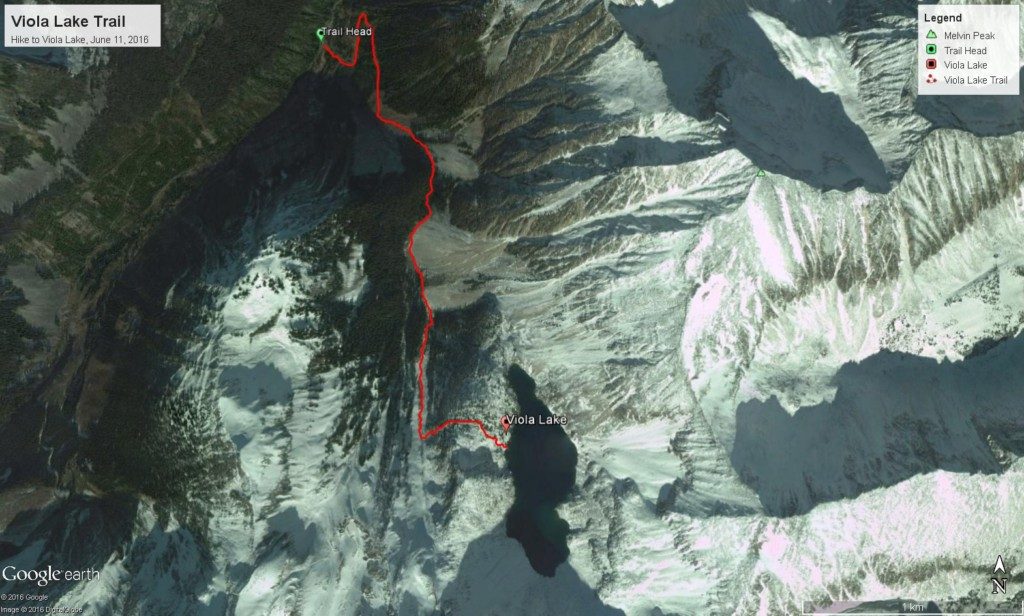 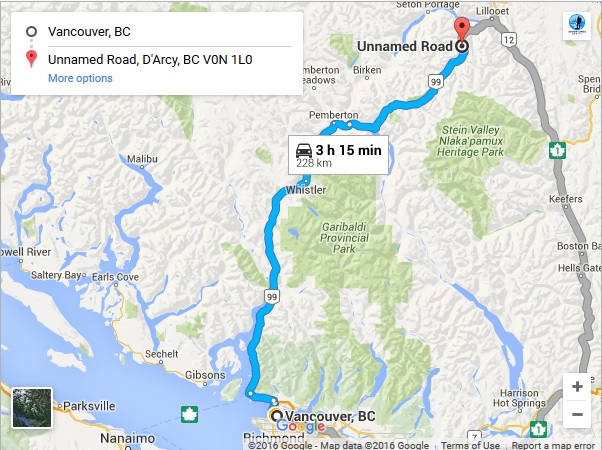 ✓ Head north on highway 99
✓ Continue past Pemberton, up the Duffey highway towards Lillooet
✓ Turn left onto the Downton Forest Service Road (immediately after the Cottonwood rec site)
✓ Continue for ~11km up the FSR and stay left at the fork in the road
✓ Park at a small pullout (on your left) shortly after ~14.5km

Fact: when I was brand new to hiking, I used to spend time on Google Maps and Panoramio, following random areas, nearby mountain ranges, creek drainages, you name it, in various/remote locations to see if I could find posted pictures of the area (knowing geo stamps may not be accurate). This was my way of figuring out if anyone had been up there, if there was a viable hike or route option, and if it was worth adding to a seemingly obscure to-hike-one-day list. I found myself constantly pausing at headwaters-type destinations. This inspired several trips in the past, for example, Helm Creek.

Anywho, I love a good headwaters hike and Viola Lake was awesome.

The Downton FSR was in good shape; a 4wd is recommended but not necessary as there are no real steep/loose sections or cross ditches. We weren’t looking forward to starting our hike in the cold downpour. The trail started off of the pullout where we parked the truck. After hopping the boulders that were blocking off the spur road, we crossed two small log bridges over Downton Creek. 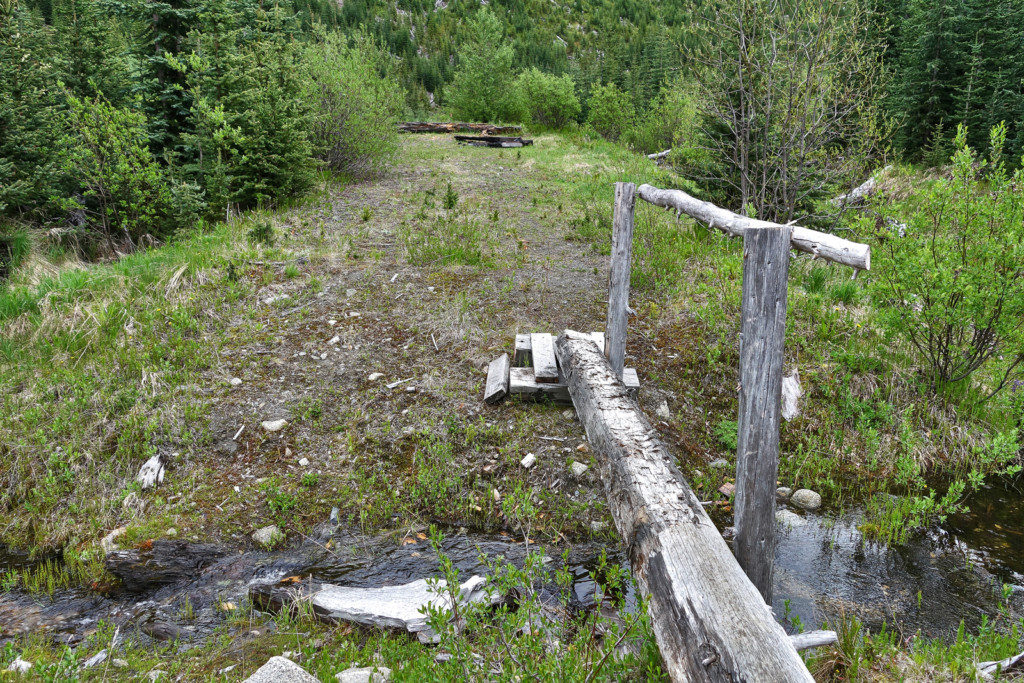 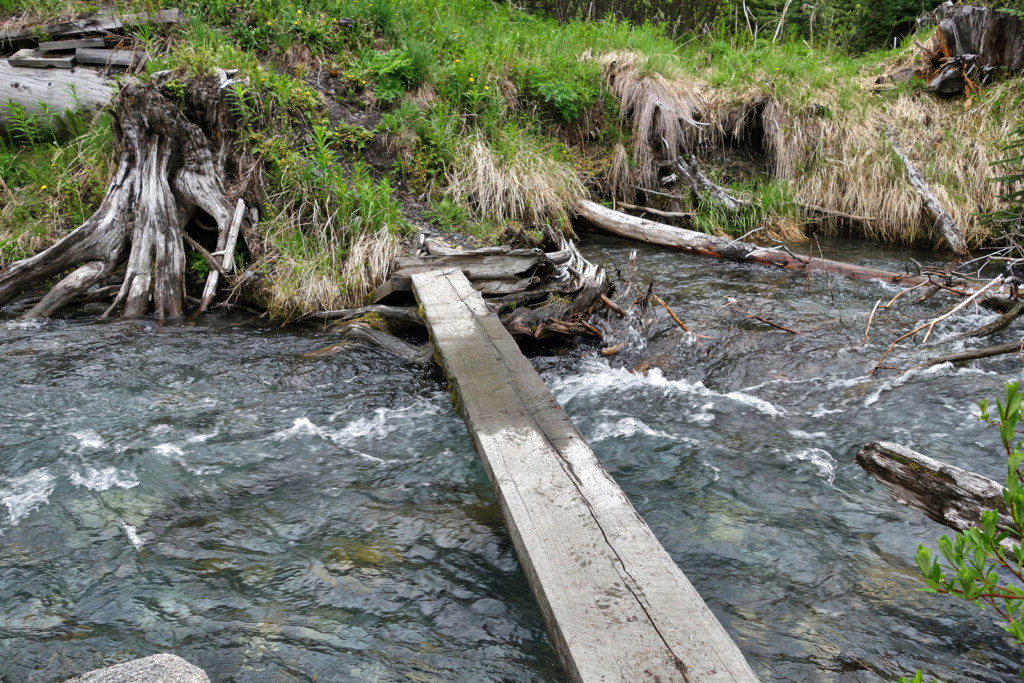 After the creek crossings, we made a sharp left and then right to switchback through an old a cutblock. The section through the upper cutblock did not have a very obvious footbed, but it was well flagged and easy to follow as the switchbacks ended and the trail continued straight up the block. It’s worth mentioning, at this point, the rain had turned to moderately heavy snow and stopped after the cutblock. 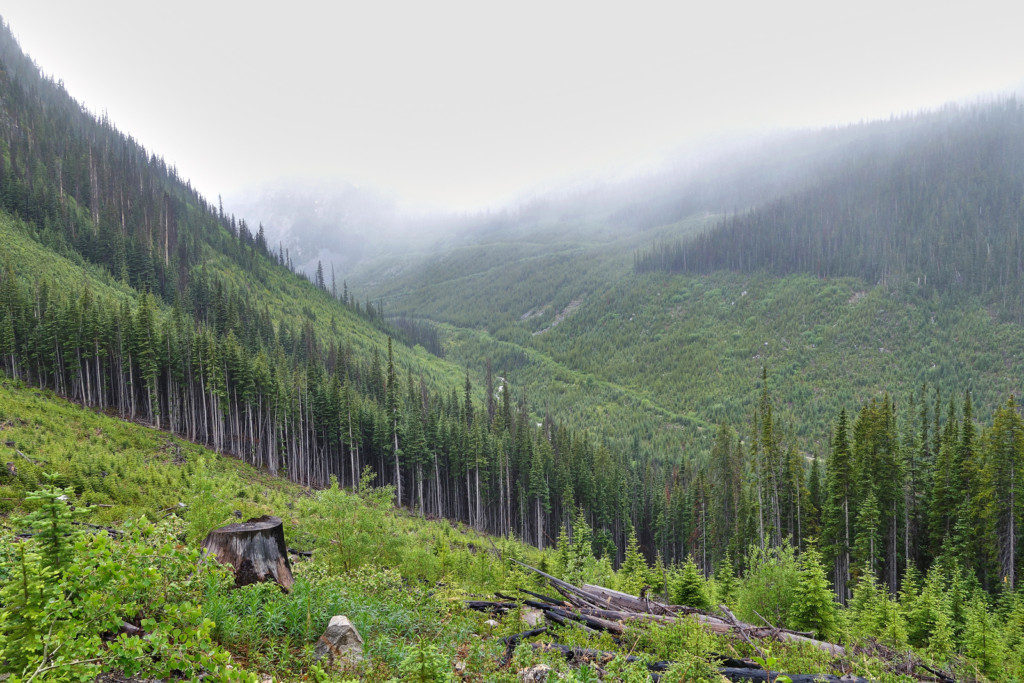 Once we left the cutblock, the trail meandered through a slightly treed area where we gradually gained some elevation across talus slopes. Again, the trail was easy to follow and we stayed on the left side of the creek and followed it up the valley. 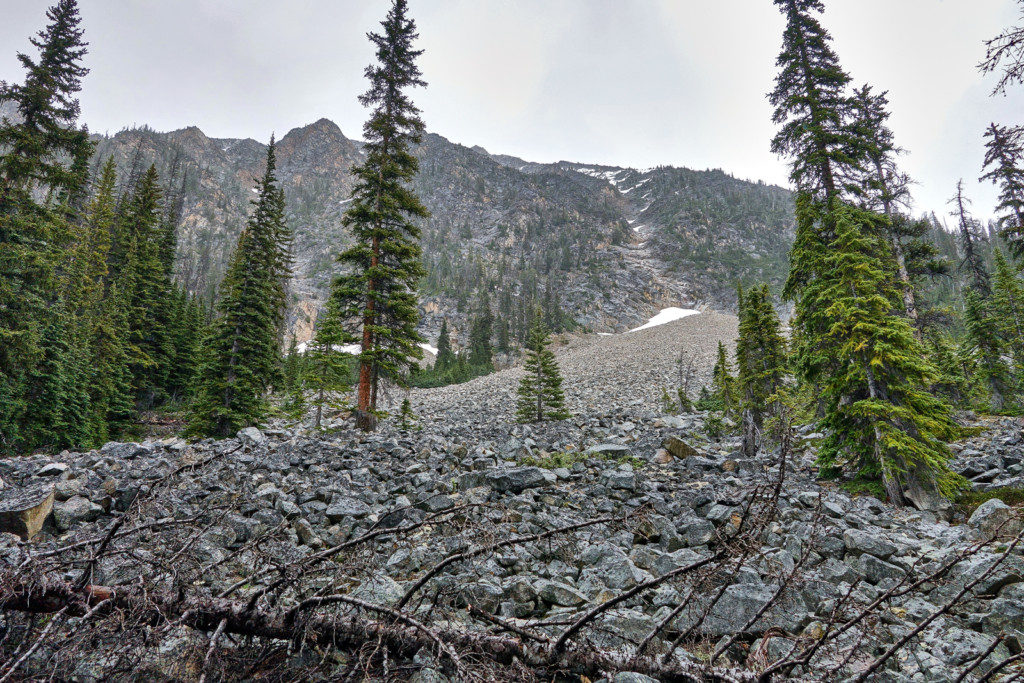 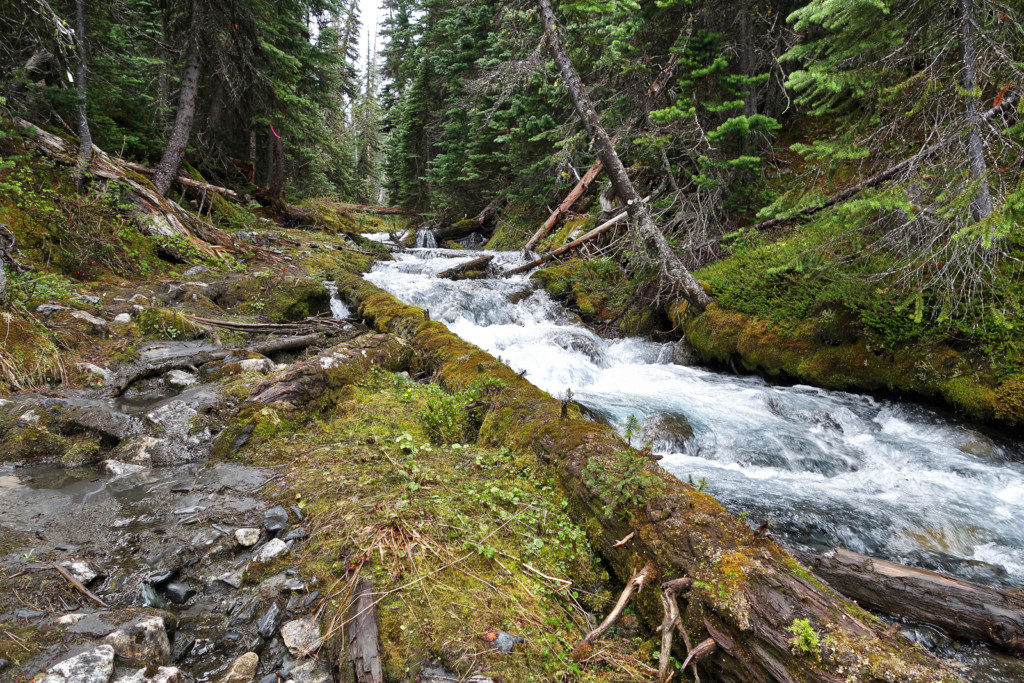 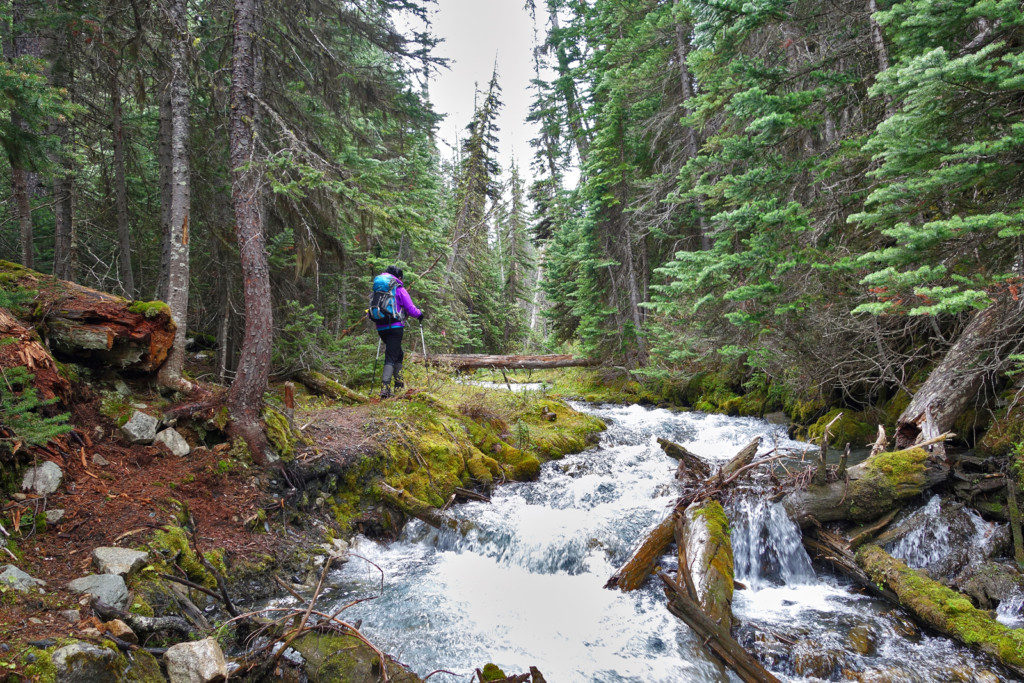 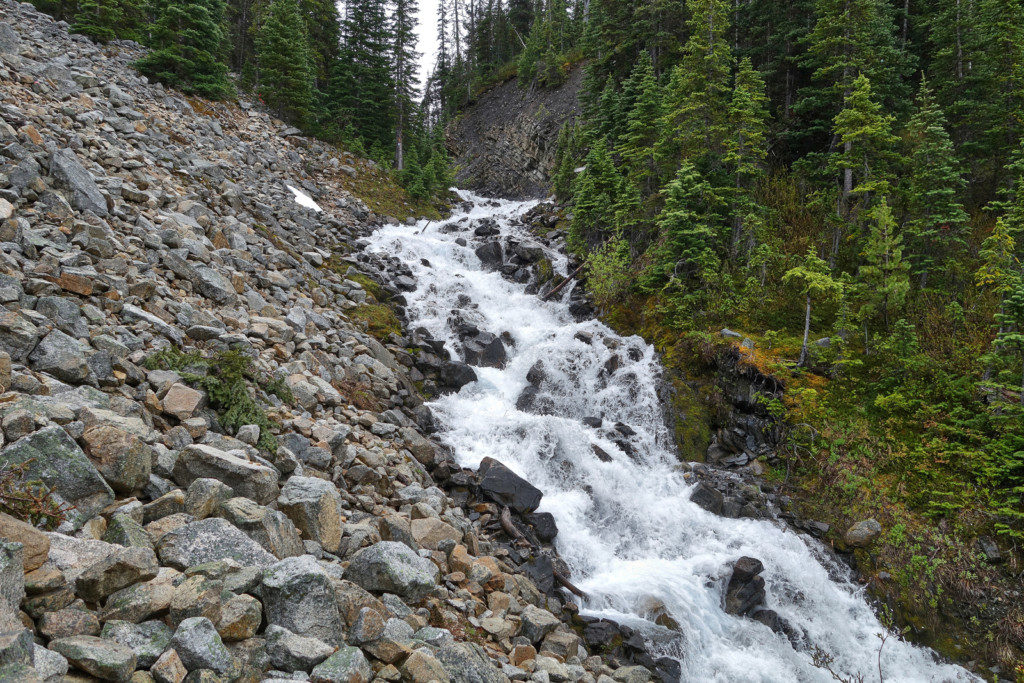 The trail then left the creek and views of surrounding peaks opened up. We crossed the base of a slide coming off of the west face of Melvin Peak.  We rock hopped across the outlet stream of Viola Lake before climbing the main avalanche slope coming off of Melvin SW2. There was still steady snow on the slope and we were able to make good time bootpacking uphill. 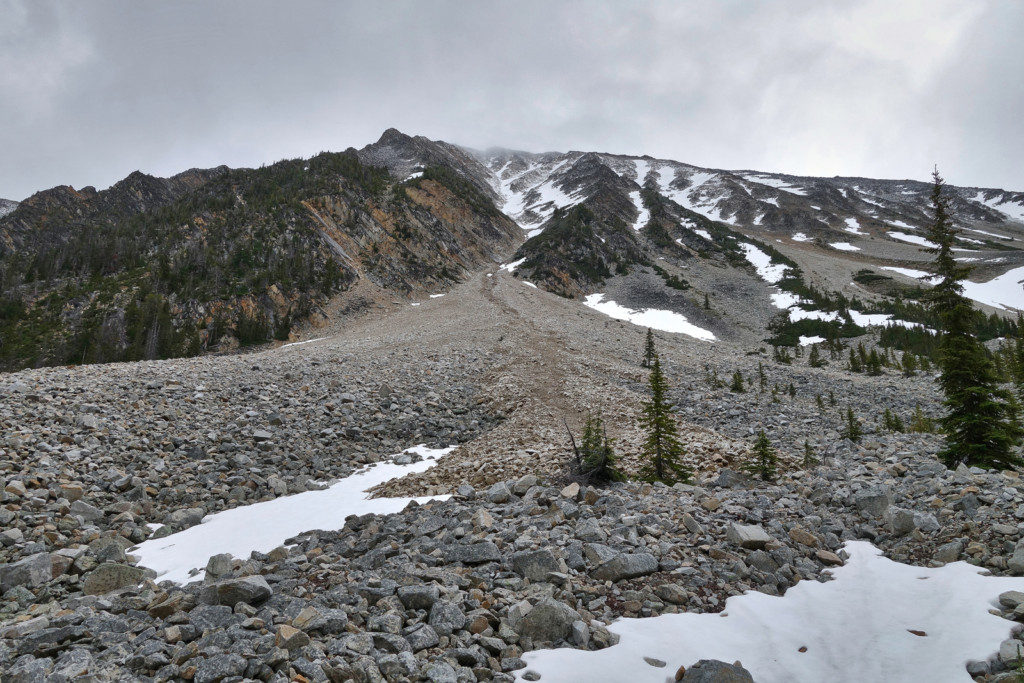 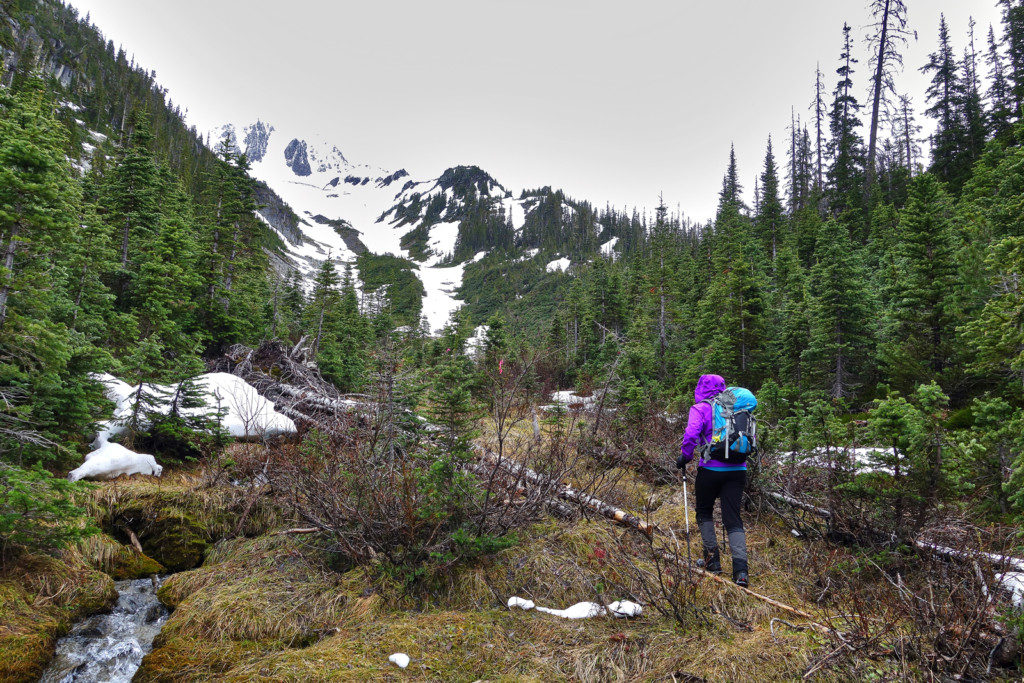 About a third of the way up slope, the trail swung left and climbed steeply out of the gully. This turn was sparsely flagged; if we did not have a GPS track to follow, we would have easily missed it.  We hopped over a few boulders as we continued up the gully and picked up a faint trail. 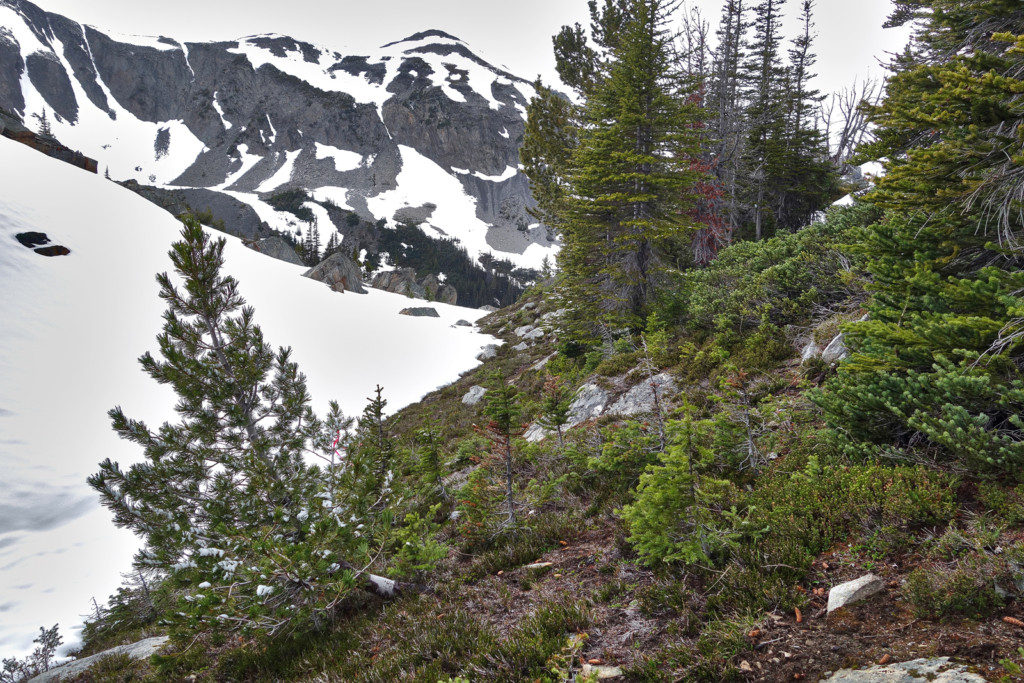 We followed the flagged trail over a rise and down to Viola Lake. 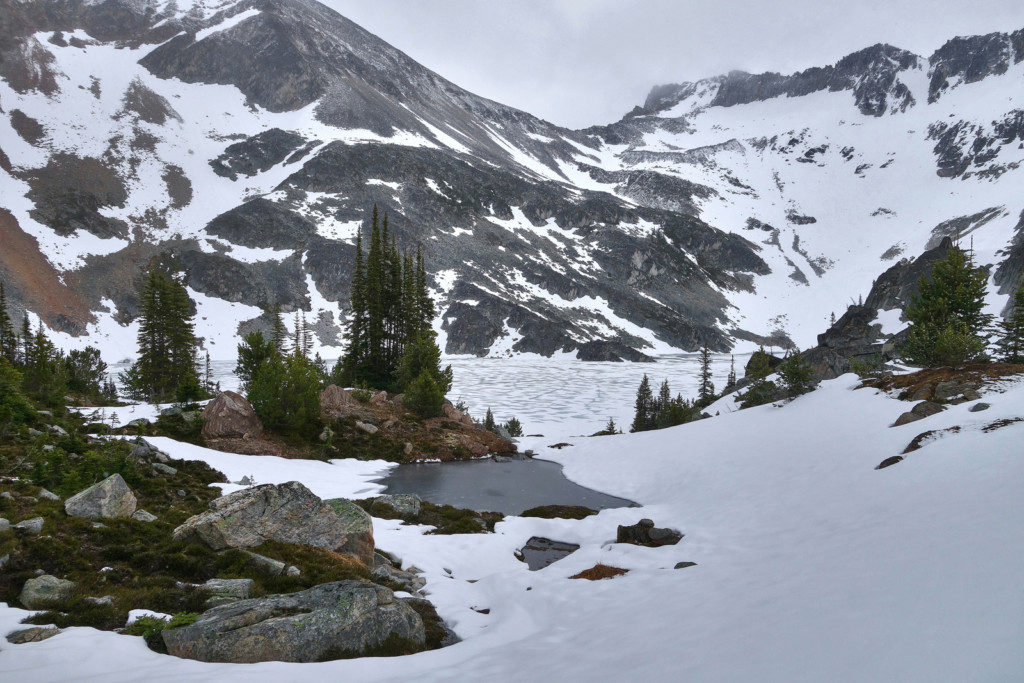 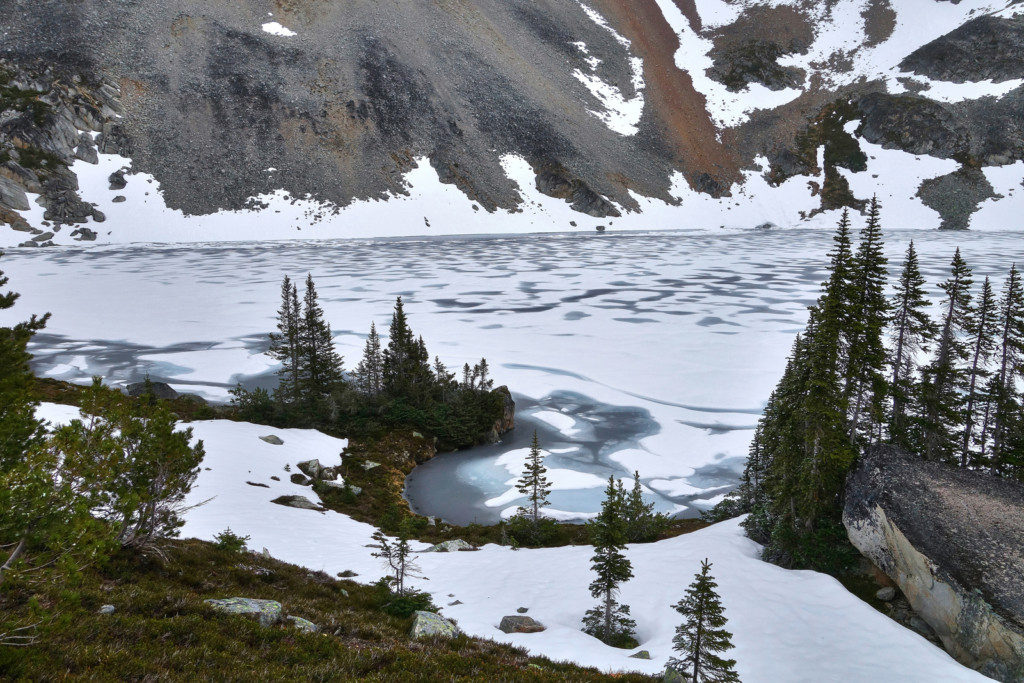 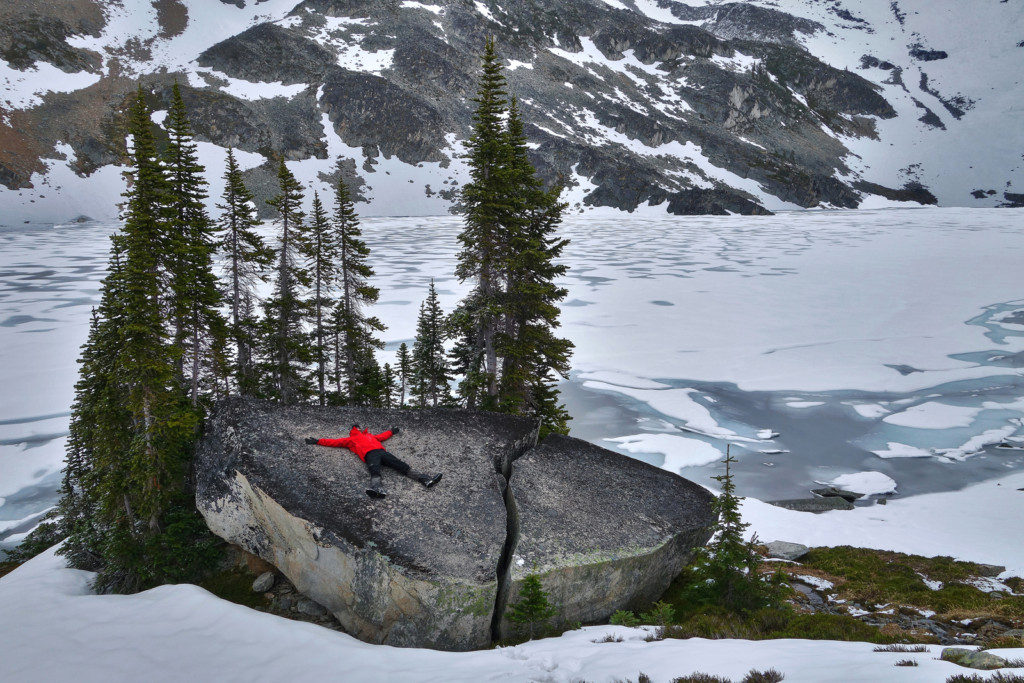 The lake came into view as we made our way towards the shoreline. It was just starting to melt out; unfortunately, we were not able to see the alpine colours. We wandered around for a while, taking pictures and soaking up the ambiance and peaceful solitude. 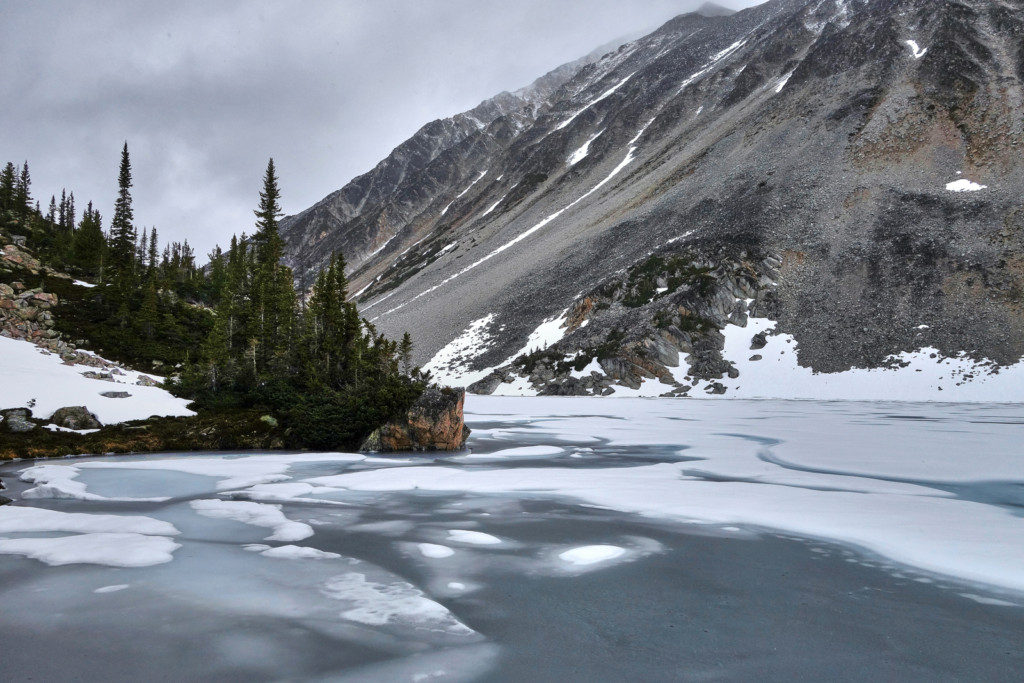 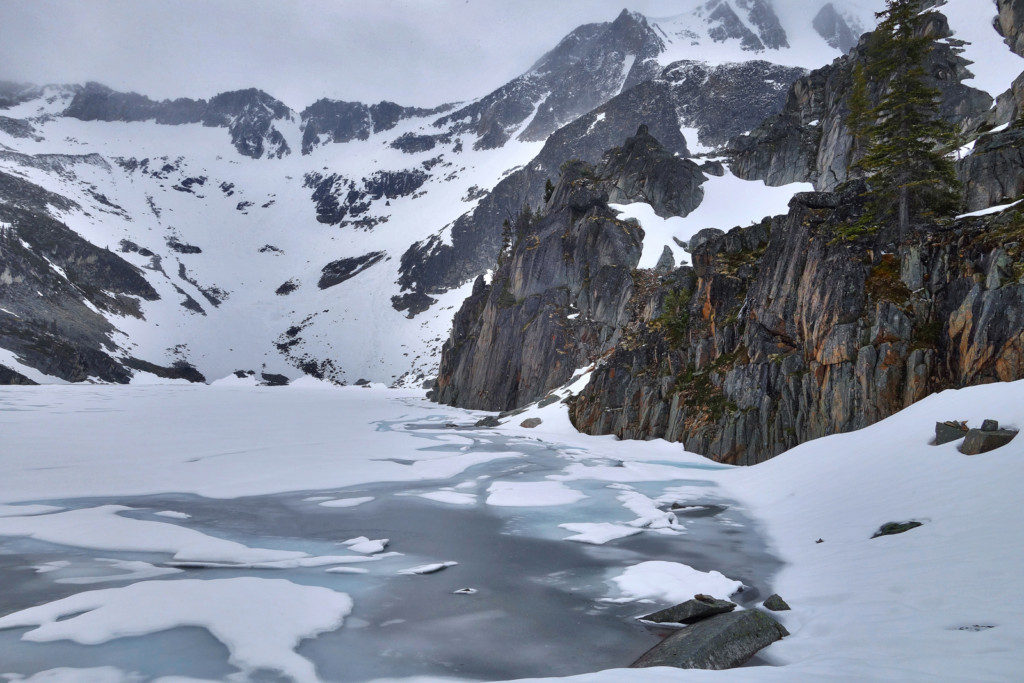 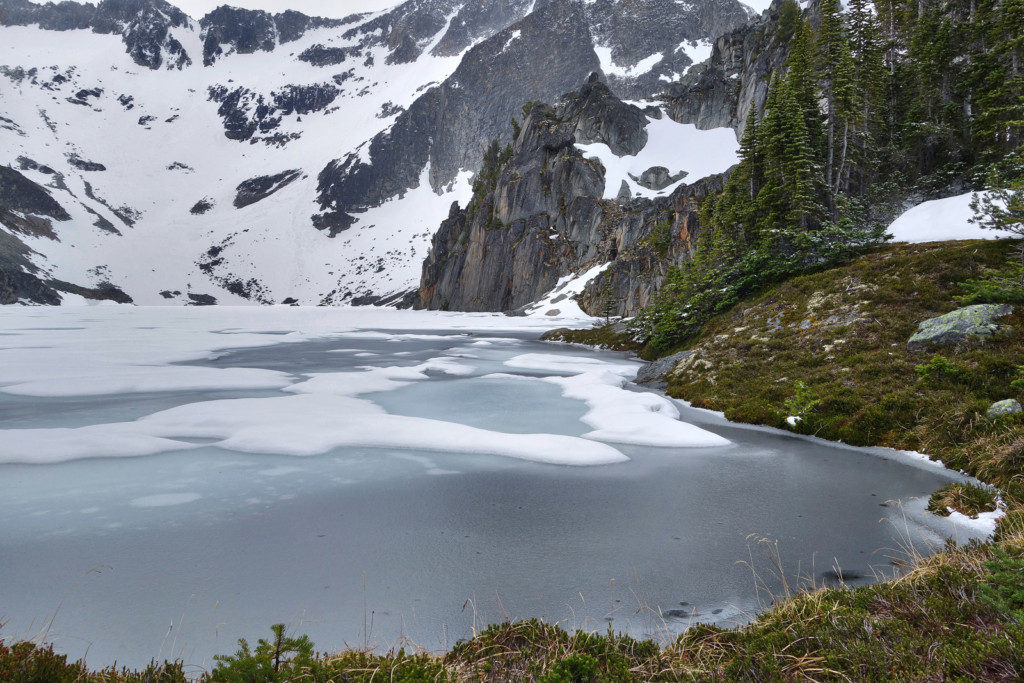 We retraced our steps and headed back to the truck. I’d revisit the lake earlier in spring and try to make a snowshoe trip out of it.

It was a relatively easy day so not much to report here. I reduced my basal rate to 50% and canceled the temp basal when we were done hiking down the steep gully. I ate my usual snacks: shot blocks and power bar bursts and carried 2L of water. I dealt with a slight low during the descent and nipped it quickly with shotbloks. Other than that, my blood sugars were stable throughout the day.

4 Comments on “Hike to Viola Lake, Downton Creek Headwaters, BC”