Despite the heavy traffic, Garibaldi Lake is awesome. Whether you’re trying to impress your social media feed with your back-to-nature simplicity, or you’re wholeheartedly looking to get out for some fresh air, exercise, and solid views, a hike to Garibaldi Lake makes a lot of people happy. Trail users and park frequenters love the area. Have you ever seen someone along the trail not smiling? – I mean, after the 6km junction of course. Because before then, the switchbacks give little reason for anyone to smile. Seriously though, the place is a gem and people know it… and apparently this is a bad thing.

Garibaldi Lake is a well documented hike; you can find information on it in all corners of the internet – so I wont get into a comprehensive break-down of the stats, though you can find some further below (don’t worry, there are photos too). Instead, I’m pretty eager to share observations we made on a trip to the lake, especially with the latest spotlight on the park, and the recent media bash on hikers ruining our trails and ‘killing’ bears.

Ryan & I generally avoid places like Garibaldi Lake, Elfin Lakes, Joffre Lakes because of the sheer volume of people along the trails. We’re weekend-ish warriors and we usually seek more remote/difficult objectives when we’re outdoors – this is preferred, but not always possible given our schedules.

Since early September, the start of a new and jam packed school semester, I’ve been dreaming of alpine meadows, turquoise lakes, and mountain tops, something that (luckily) isn’t too hard to experience around here. Last Sunday, given my tight schedule, Ryan and I decided to check out the straight-forward/moderate hike to Garibaldi Lake. I’ve been in the Garibaldi Provincial Park a handful of times, checked out Empetrum Peak, Panorama Ridge, Helm Lake, and Cinder Cone. I’ve been to Garibaldi Lake itself a few times in the fall & winter seasons, though I’ve never really seen the lakes’ turquoise-blue colour, so I was stoked to check it out. Especially since it’s been populating my Instagram and Facebook feeds all summer. I’ve avoided the lake during the summer season because of horror stories of high-people-traffic, immense amounts of garbage, and because there’s no shortage of trails to avoid any of the above.

Well, when we got up there, we were surprised and a little confused. I had mentally prepped myself to be disappointed by people throughout the day… and I wasn’t. I was ready to call out all sorts of trail misdemeanors on reckless hikers… and I didn’t have to. We saw dozens of fairly large groups of young (highschool-ish) campers on their way down. We saw loads of tourists, families, and clusters of hikers of all shapes and sizes. Anticipating a gong show further up at the lake, we were shocked to find zero garbage along the trail, shoreline, and campsites, and generally respectful people scattered about. Naturally, we were unclear about what the hell we’ve been hearing on media about our parks (Joffre Lakes excluded). 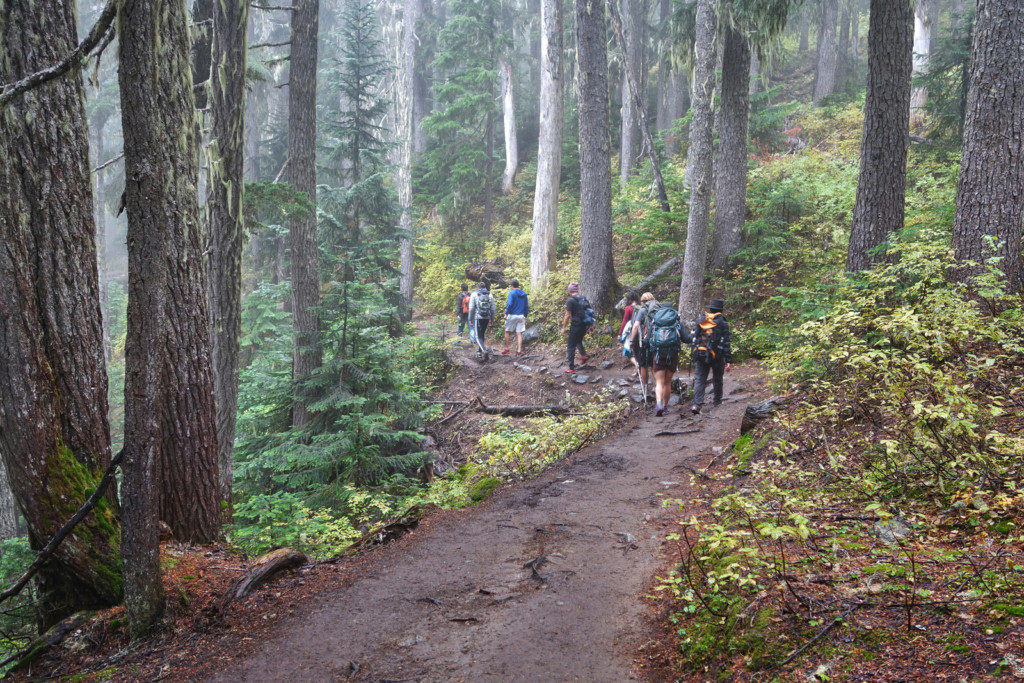 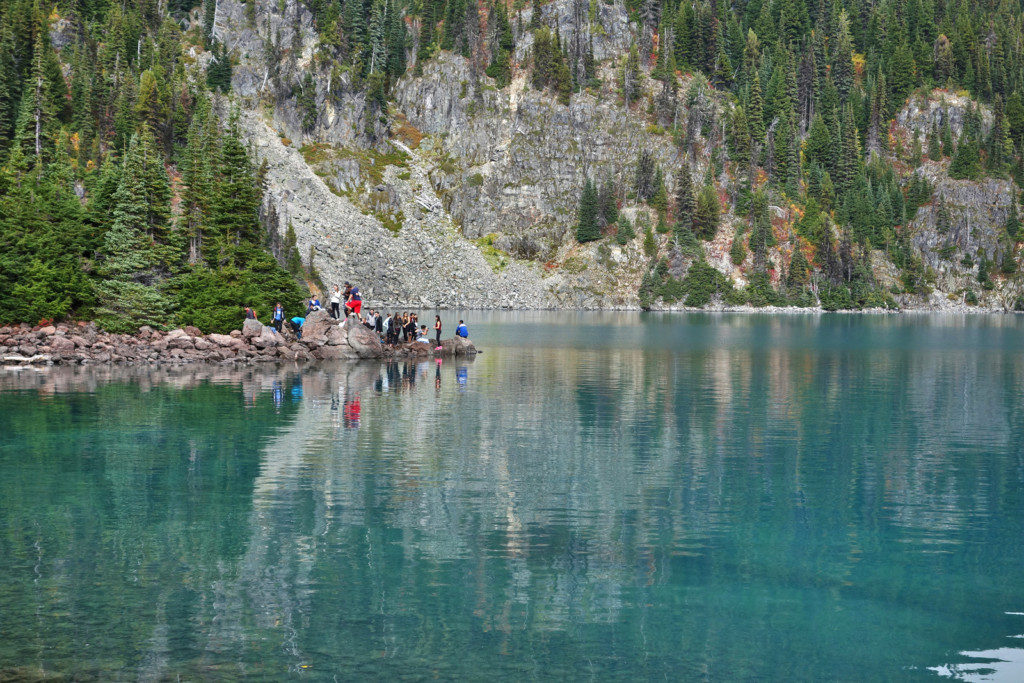 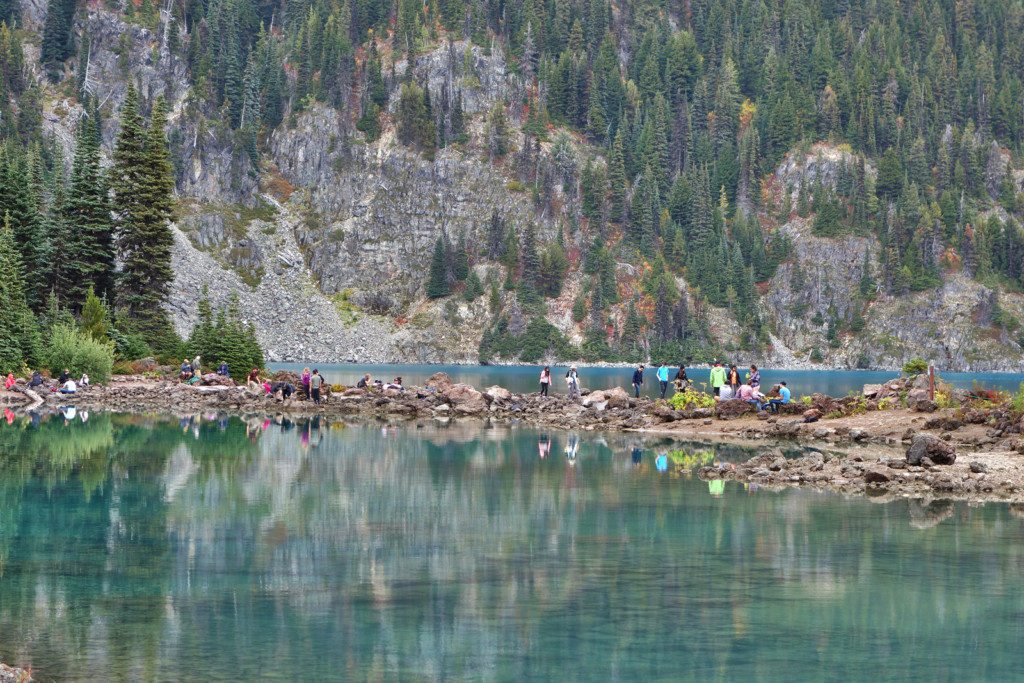 There’s no doubt our parks are seeing deterioration from being loved to death, but I now suspect a lot of the hype from the comments I’ve read on recent media threads are a case of people looking for righteous indignation or the next hot topic to jump on – do they truly know what they’re talking about? After our trip, I wonder. Granted we may have seen the lake on an unusually good day, but it’s possible that the naysayers only saw it on an unusually bad day. Maybe we missed the summer blast of careless hikers. Or maybe it was never as bad as many have expressed.

I’ve followed various online threads on this topic and the one similarity I found everywhere was that seasoned hikers were often finger pointing and generalizing all trail users with a condescending tone. This is likely detrimental to the issue of trail/park deterioration. Not to single out the age group that may be causing issues, but think back to when you were 18-20 years old; you’ve done something wrong and you’re in trouble. To rectify the problem, your parents want a specific behavior out you going forward. To get that behavior, did they scold, shame, and criticize it out of you? Did they question your common sense? Or did they have a level-headed, rational discussion about their concerns – in hopes for a positive outcome. If they did scold and criticize you, how did you act in return? Likely, you ignored them (or even did the opposite) because you’re an adult and you know better. Could that be the reason why some trail users seem to leave their sense of trail etiquette at home when they’re out hiking? Because they feel they’re being unjustly criticized? I don’t have the answer, but it’s something to think about.

Back to our hike; three things we saw people consistently doing wrong:

I suspect most of these hikers don’t understand the consequences of any of the above.

Hikers were generally respectful of the environment and this was great to see. My favourite part of the trip was witnessing some first-time-visit reactions when they caught a glimpse of the lake colours through the trees – mine included. It was a little heart melting to see the wide-eyed awe-struck population of trail users, and it’s really not something to complain about. Granted there are issues, but condemning people not to use the trail or whining when they do is egocentric. The Garibaldi Park is ours as much as it is theirs. 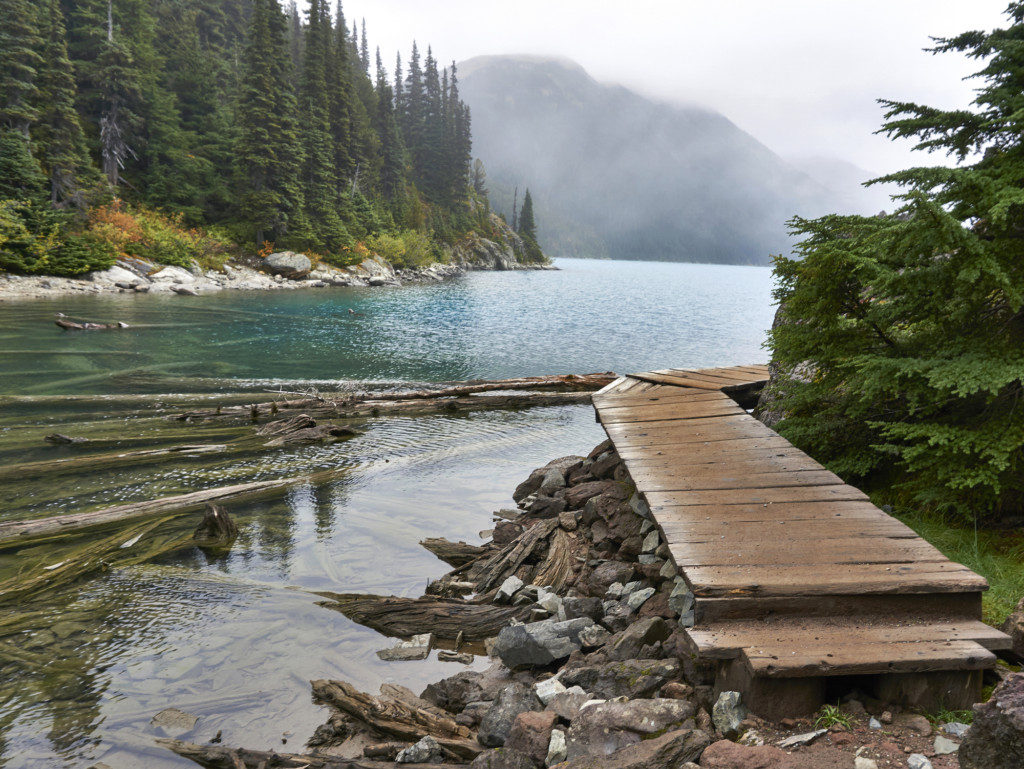 We arrived at the Rubble Creek parking lot and geared up for our hike to Garibaldi Lake. It was an obviously busy weekend as some cars from overnight campers were parked a few hundred meters down the road from the parking lot.

The first ~7km were basically all uphill with a gradual incline on an extremely well groomed track. This section of the trail was rebuilt within the last few years and was well armoured for the high level of traffic it sees today. The switchbacks cut through the forest on our way to the 6km junction. You’ve heard the saying “it’s not about the destination, it’s about the journey”. Yeah, that’s not true until you hit the kiosk at the junction. Check it out and you’ll know what I mean. 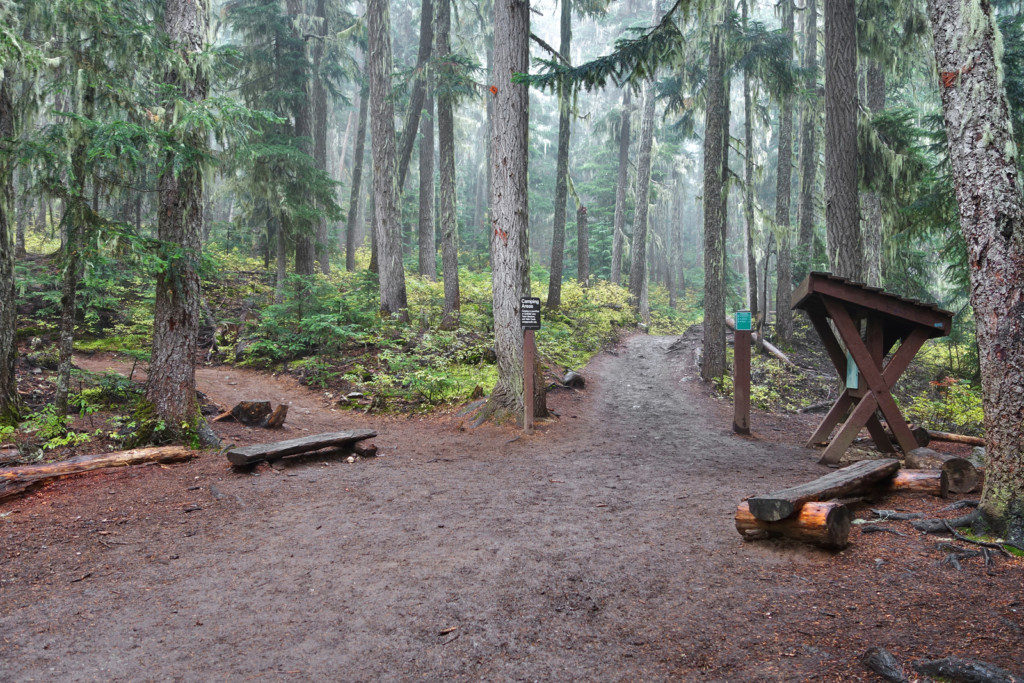 Beyond the junction and on the Garibaldi Lake trail, we were greeted with fall foliage. There were lots of yellows and reds framing the trail to our first stop, Barrier Lake. The trail continued through the forest and we started seeing the turquoise-blue colour through the trees. Keep in mind, this was my first summer trip to the lake. My reaction to Ryan as we approached Barrier Lake was “holy crap!” and “why haven’t we been here before?!”

When we left Barrier Lake, we continued on the trail as it meandered through the forest. A short while after, I caught a glimpse of more turqoise-blue lake colour peaking through the trees. This time it came from Lesser Garibaldi Lake.

We stopped at Lesser Garibaldi Lake and scrambled down to the Taylor Creek inlet for views and pictures. 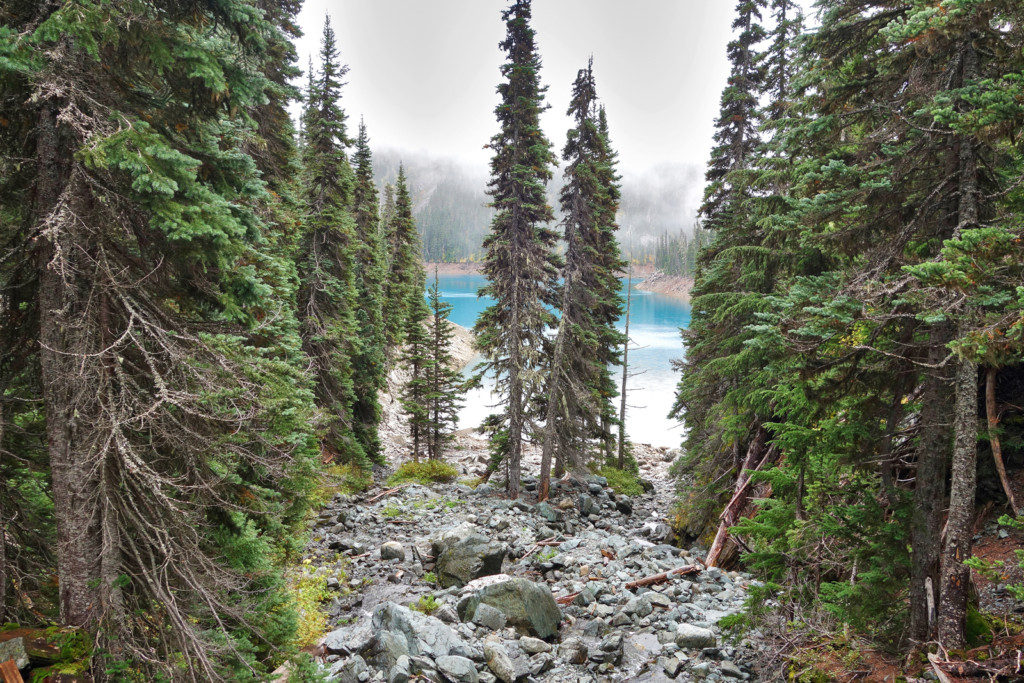 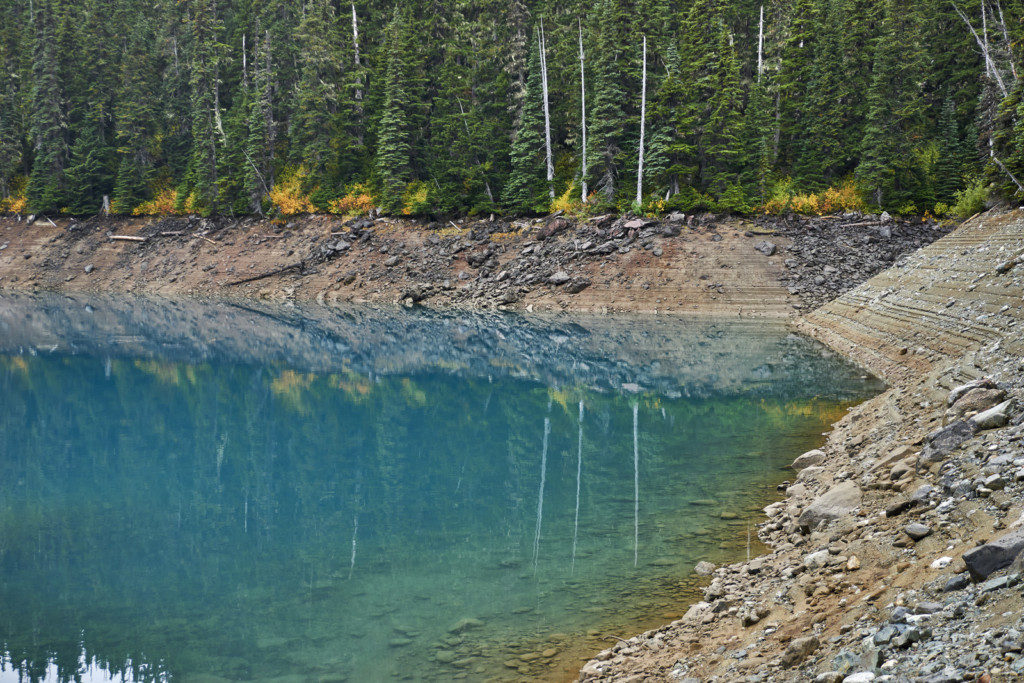 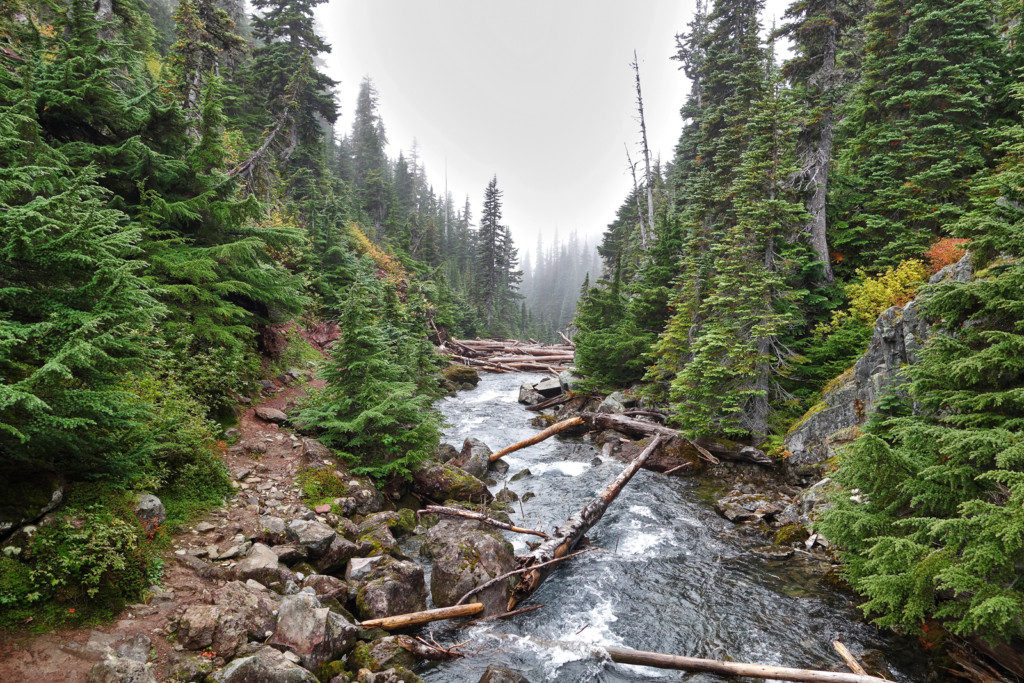 Next, the trail continued as it hugged the shoreline and brought us to the campground and famous lakefront view – you know, the one in all your social feeds. 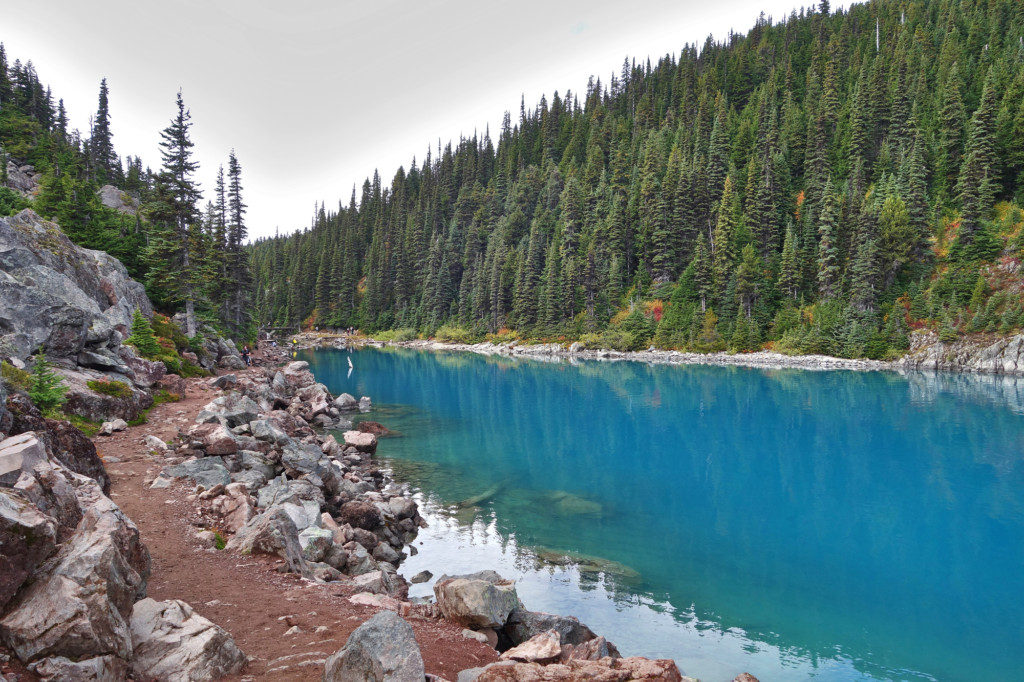 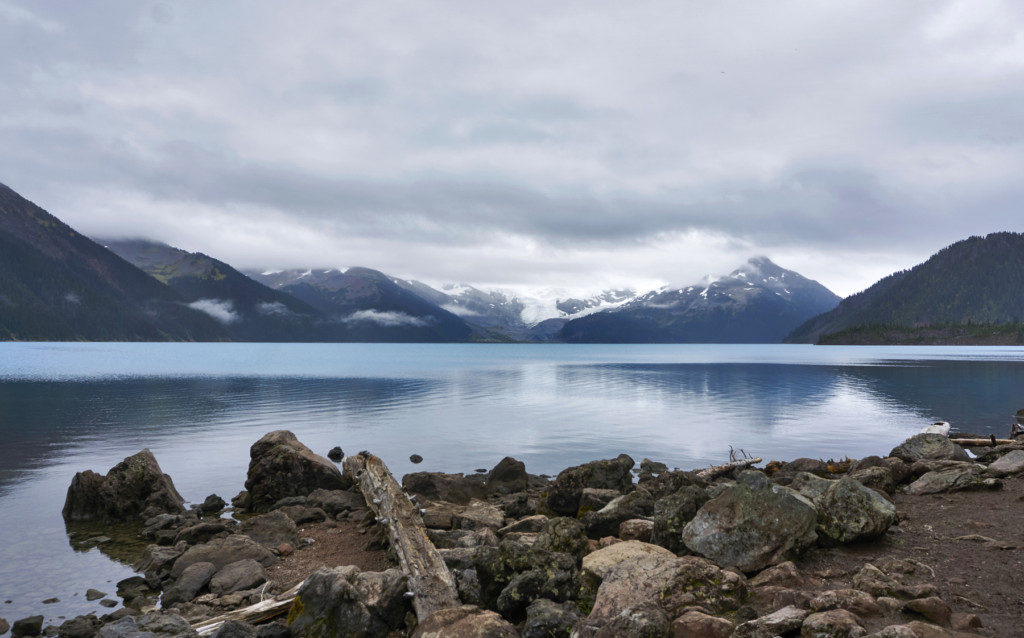 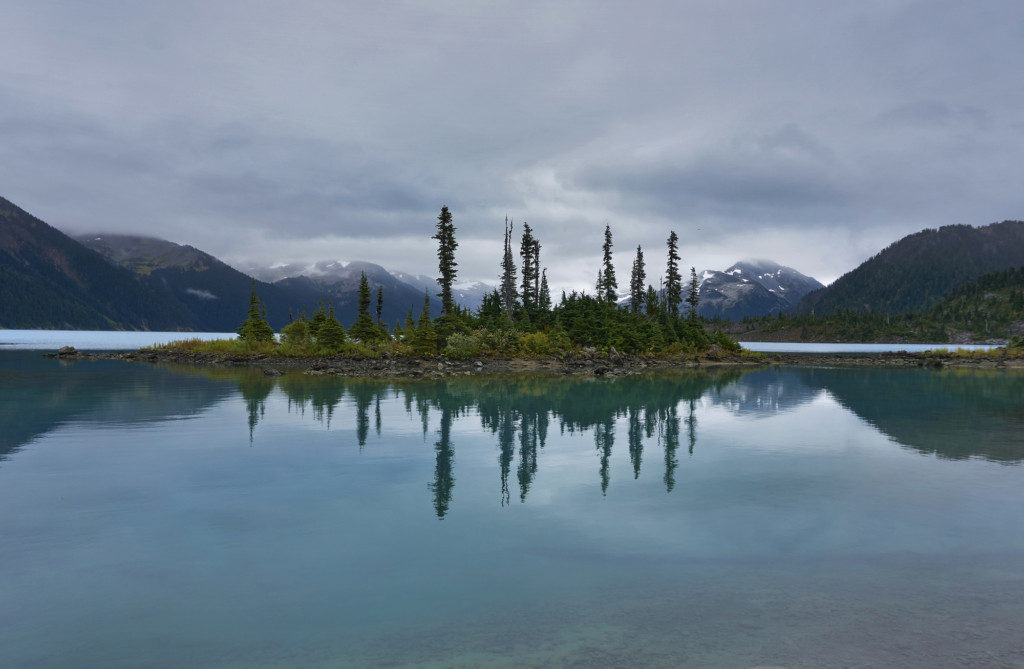 We lounged on the ranger cabin dock and waited for some clouds to burn off and blue sky patches to appear. Most of the crowd stayed near the first cook shelter; we saw fewer people further down the lake. 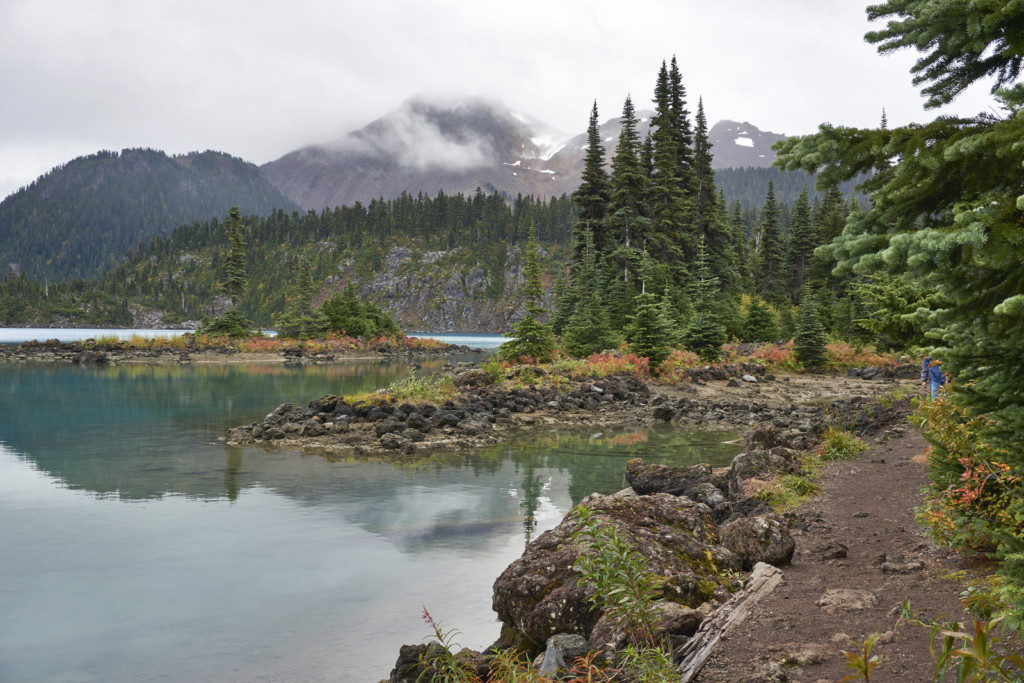 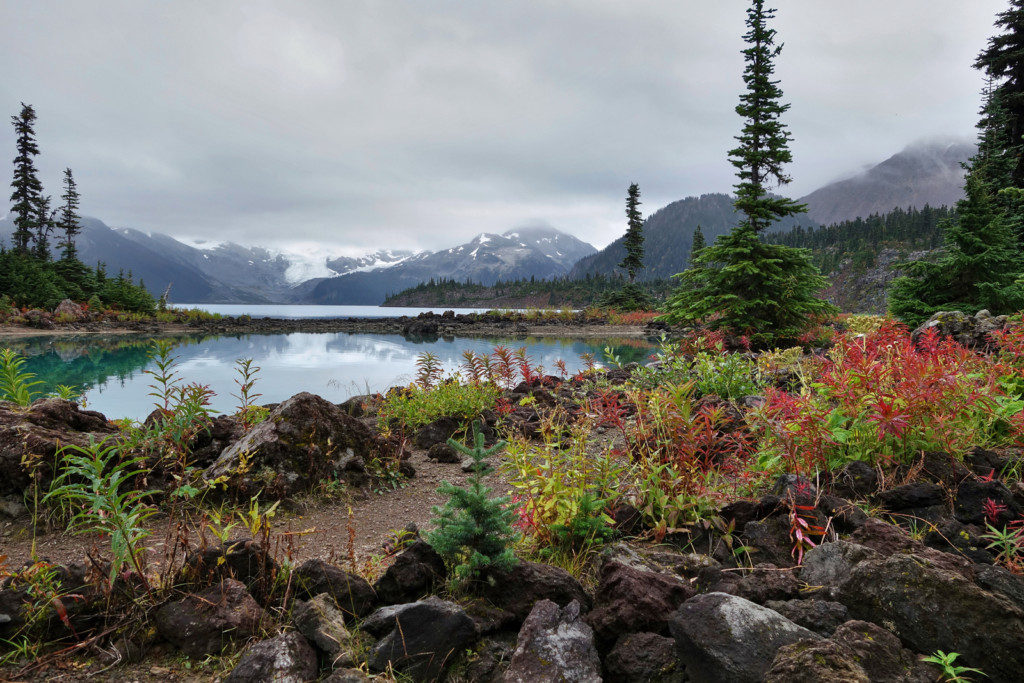 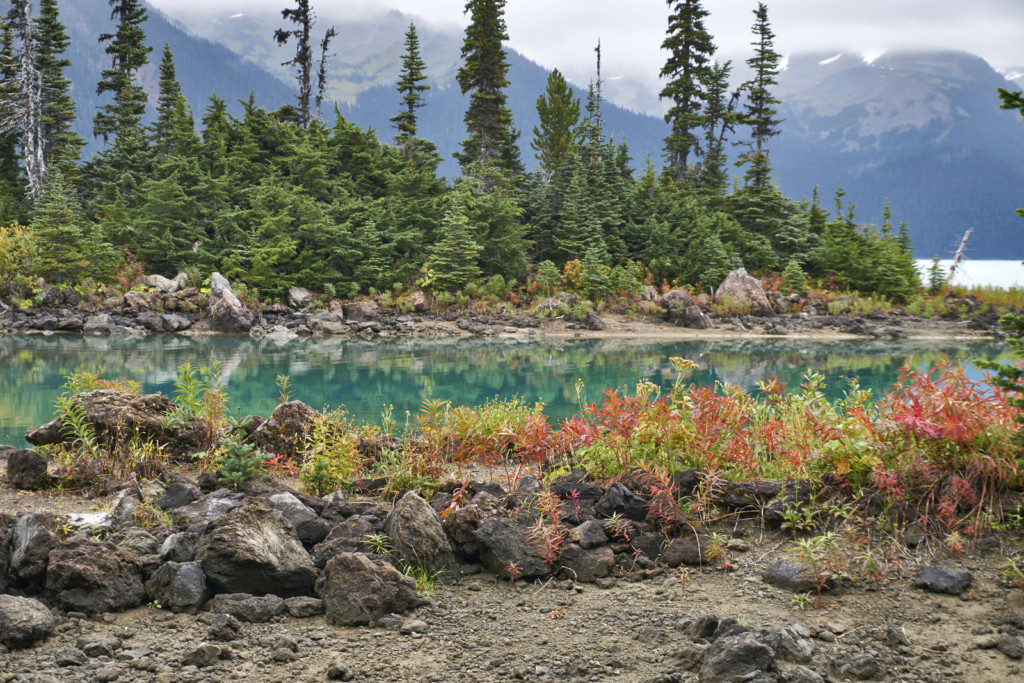 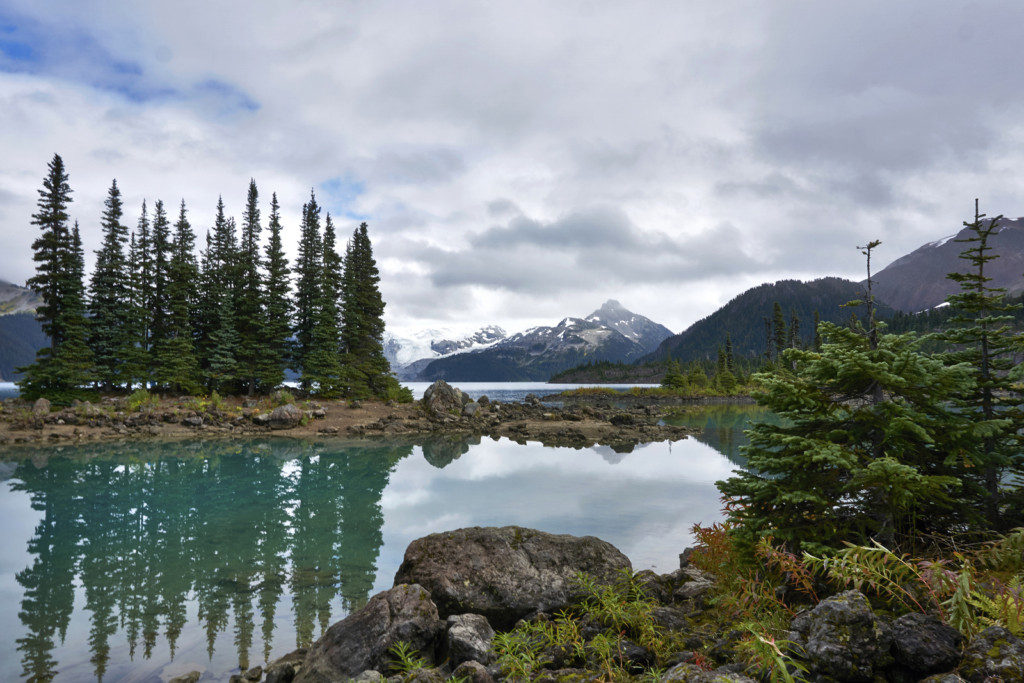 The peaks and glaciers overlooking the lake were my favourite part. 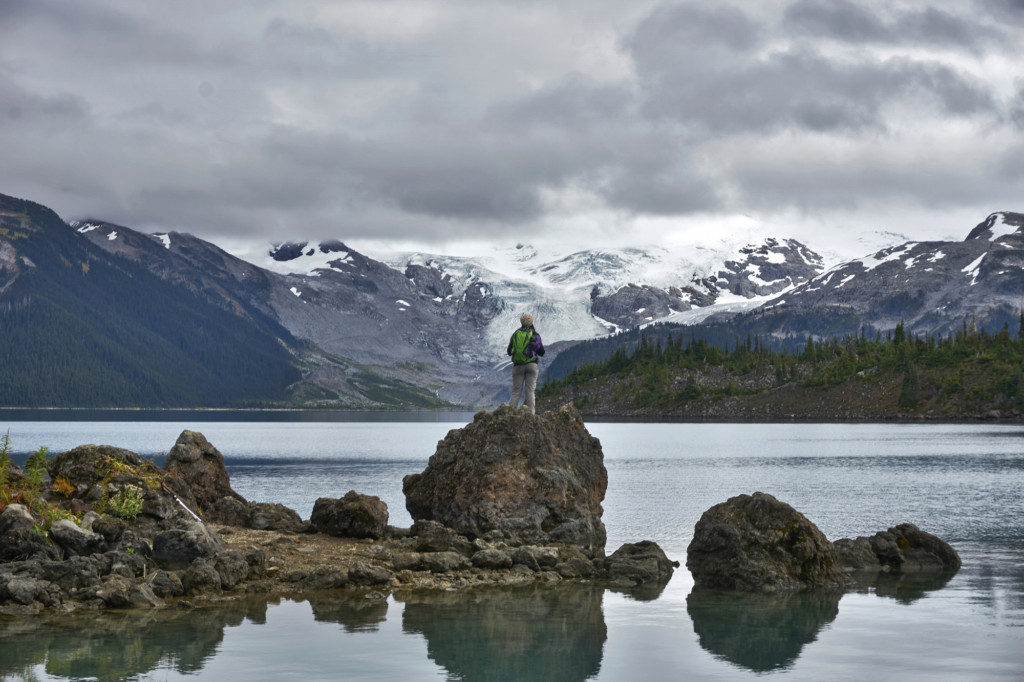 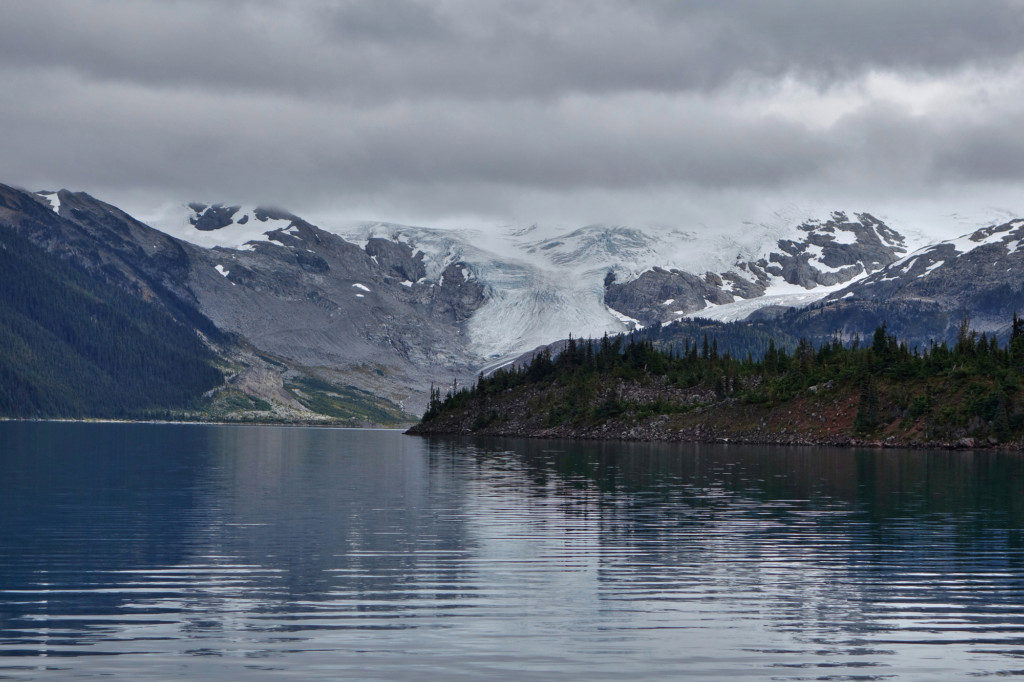 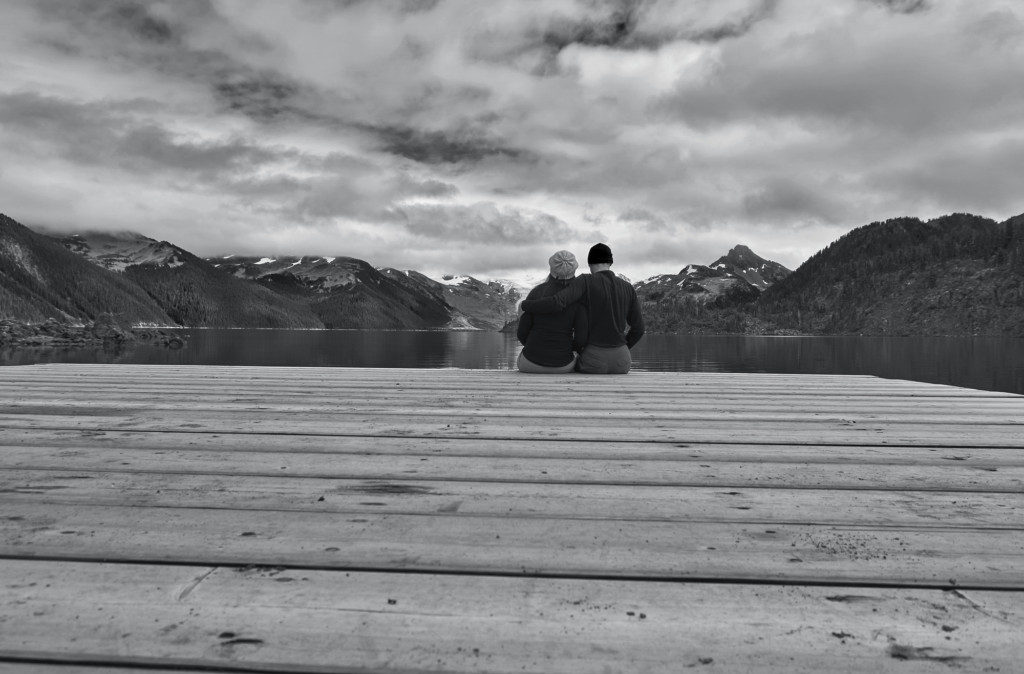 Before turning back, the sun came out briefly and I caught a glimpse of the turquoise lake colours. 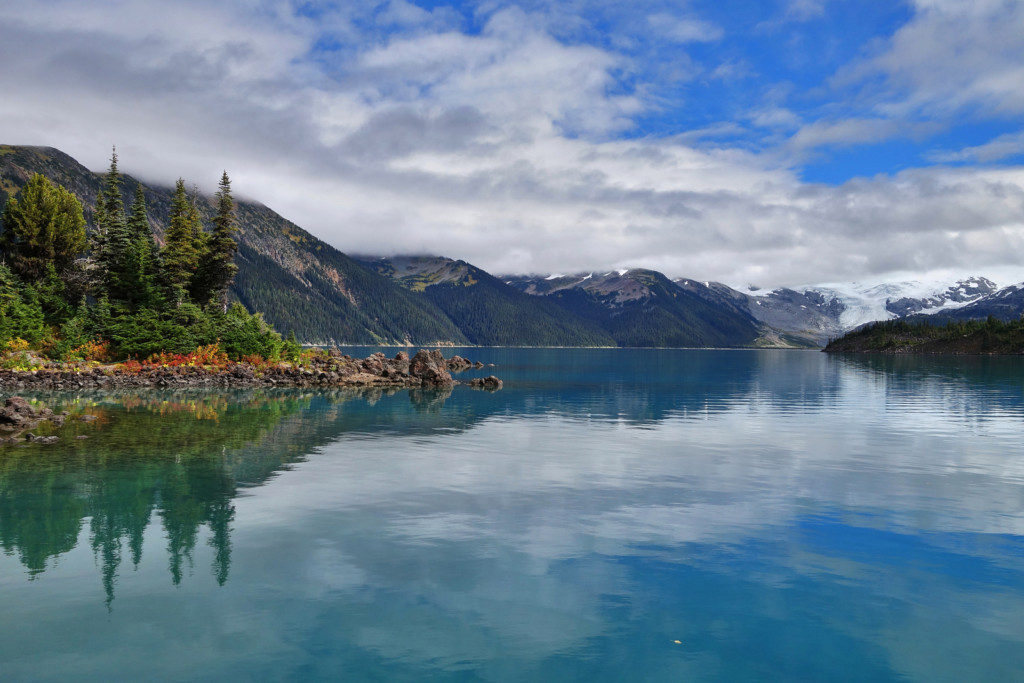 After soaking up the lake and observing others around us, we were content – confused, but content – and headed back. 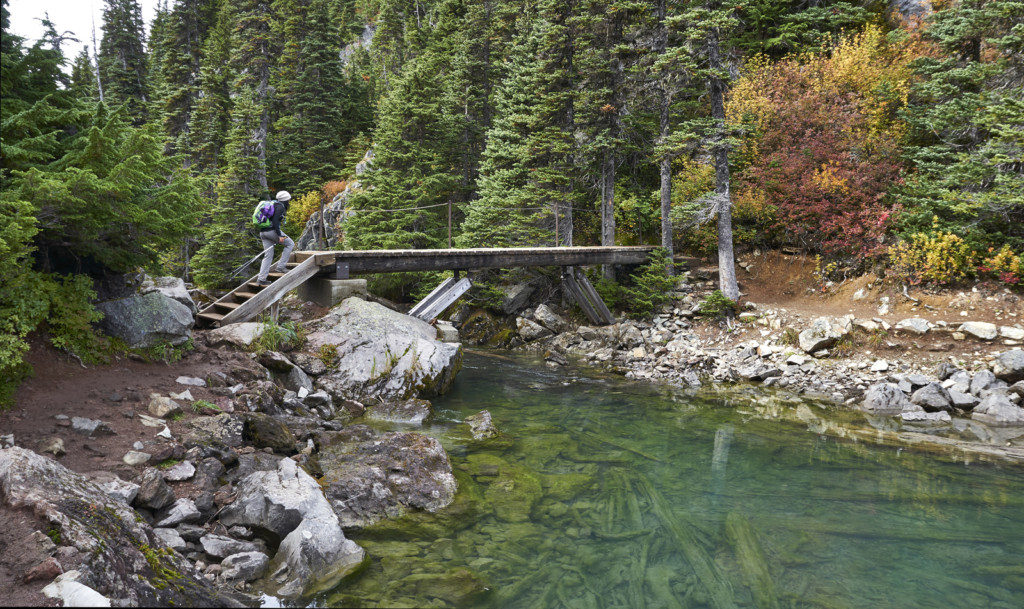 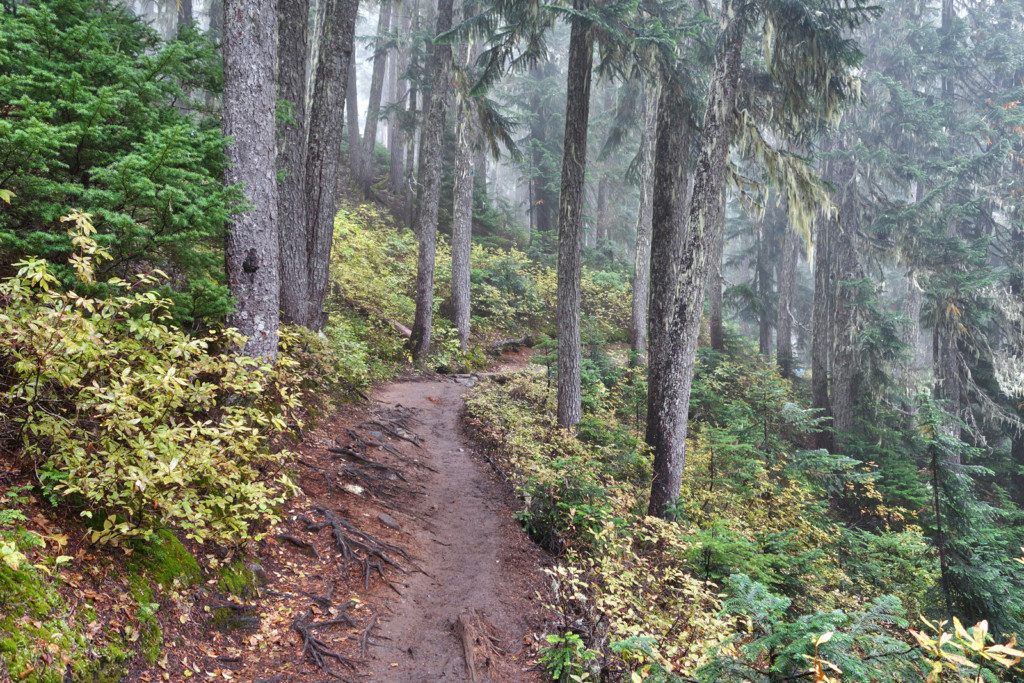 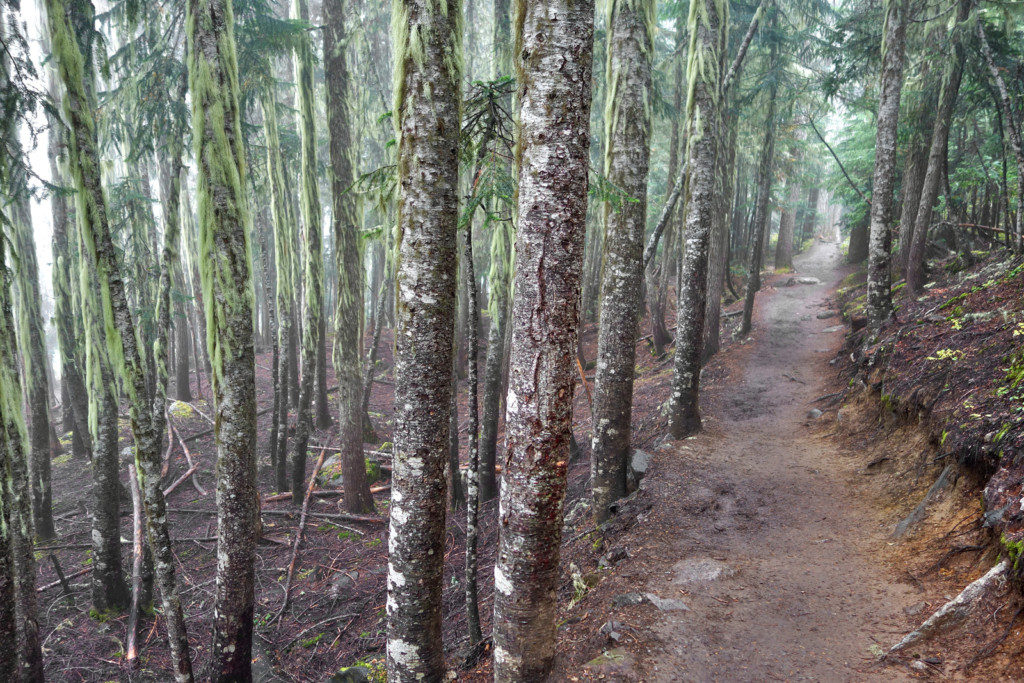 On our way back, we retraced our steps to the parking lot. Ryan & I had a heavy conversation about fellow hikers at the lake, how clean everything was, and how long the lineups were at the outhouses (at least people were waiting). We heard a loud rustle in the trees above us that seemed out of place because there weren’t any nearby junctions. We scanned the trees and boom, it was a bear. There was a pair of hikers right beside us and we all froze as the bear crashed through the trees, traversing the slope. It eventually turned downhill and popped out on the trail just behind us. The bear turned and looked at us for a moment, and quickly darted off the trail, downhill towards Lesser Garibaldi Lake. One more thing we were glad to see – a bear that did not seem conditioned to people. 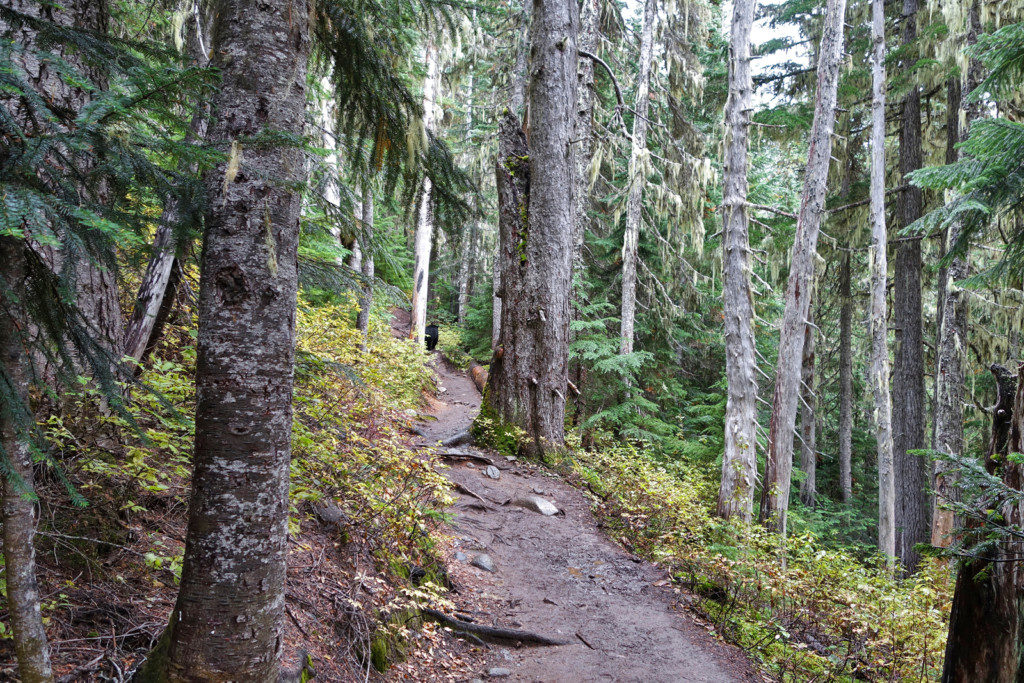 And that’s it on my end. Perhaps my favourite thing about Garibaldi Provincial Park is the options are endless across its 1,950 square kilometers and there’s bound to be something, some trail to suit anyone. The parks are going to get a lot busier with the finer weather we’ve been having in recent years. Brace yourselves.

My final review: will I ever go to Garibaldi Lake again during the ‘on season’? Probably not. It’s not my cup of tea. I will be exploring all sides of the park and bypassing the lake on my way to other objectives though. The trail users weren’t as bad as media has let on. You may think all the ranting and complaining about trail users by folks on media has made an impact, and that could be why we saw a lot of positivity, but with my understanding of people and some basic psychology, I’m extremely doubtful.

I don’t have much to report here, it was a mellow day. I started off with a 50% basal reduction and cancelled the reduction on our way back to the truck. Typical snacks for the day were Powerbar Gel Blasts and chocolate covered nuts.

2 Comments on “Hike to Garibaldi Lake, Garibaldi Provincial Park, BC”