It’s that time of year again, when we choose the most perfect moments and reflect on them, hold on to them, to validate to ourselves that they were something special. We choose these memories because they are the way things should have been, would have been, had it not been for, well, life. In these snapshots, the moments are unwarped and golden. The views and sensations are in fine detail: wildflowers dancing in the breeze, rainfall streaming down my face, legs overrun by a burning sensation from pushing myself hard, and hills being conquered until there’s nothing left to ascend. The finest detail, though, is in how I felt: I was laughing, we were sore and tired and relaxed at the same time, and we were always dreaming about the next adventure.

I learned many lessons throughout the year, including Twenty Things Only Adventurers Would Know, but the most important of all is attributed to what the mountains taught me:

For a wild place, where anything can happen, I never feel more in control than when I’m in the mountains.

The outdoor community saw some adversity this year, with a very obvious increase in trail users within our provincial park systems. As much as I dislike large groups of people hiking in areas I used to be able to enjoy all to myself, the outdoors are for everyone; after a trip to Garibaldi Lake, I did my best to share a balanced perspective of what we may be seeing out there.

I saw some personal adversity this year too. As a full time student, I struggled to manage my free time and this resulted in not getting out as much as I would have liked. I talked about this experience through a post, where I highlighted my philosophy of a social media user.

Without further ado, here’s my list of top eleven moments of 2016, most of which I haven’t had a chance to blog about, yet:

To celebrate the New Year (2016), Ryan and I drove to Marshall Lake, located in the Bridge River Valley. We watched extraordinary fireworks in -20 weather on a frozen lake, with a great group of locals. 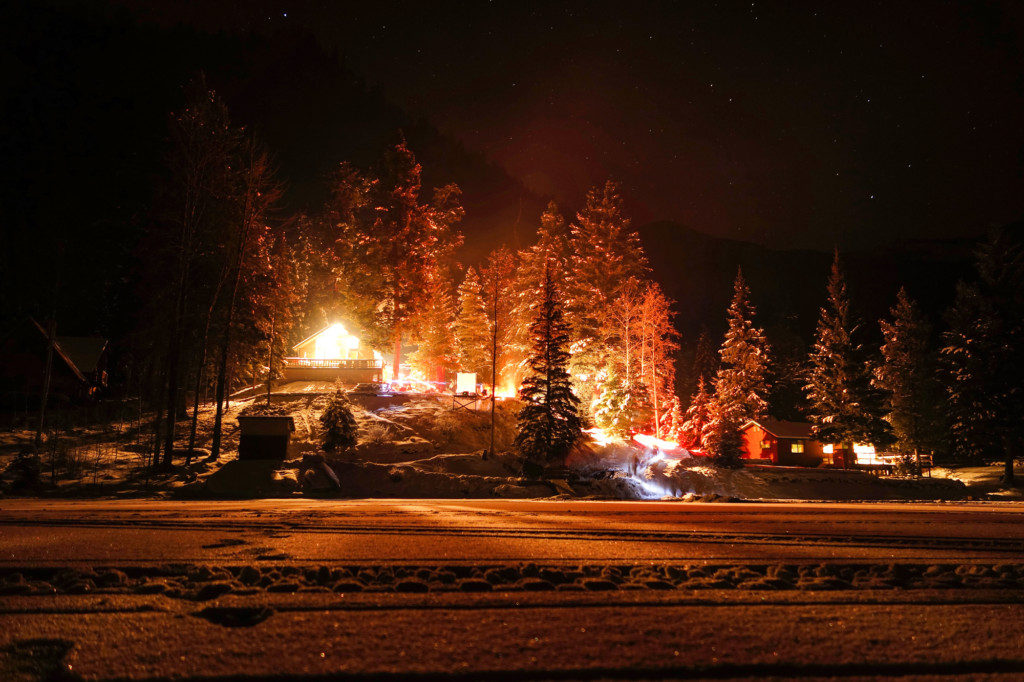 On Jan 1, 2016, we spent some time crossing a frozen Marshall Lake, ice fishing, and exploring the nearby area. We wanted to do something different to ring in the new year. Nailed it. 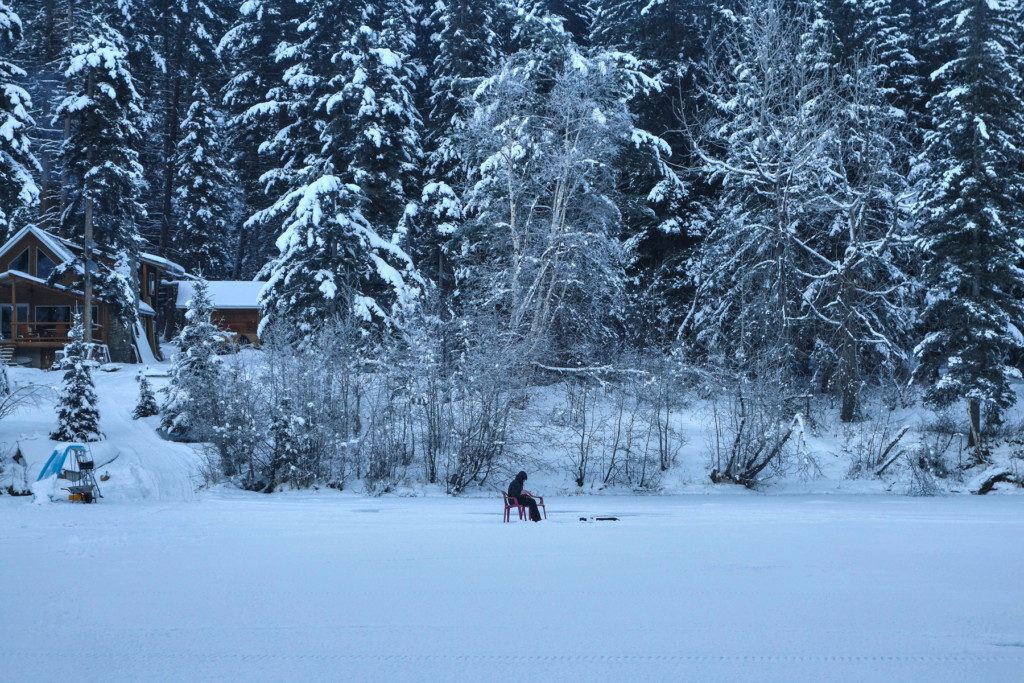 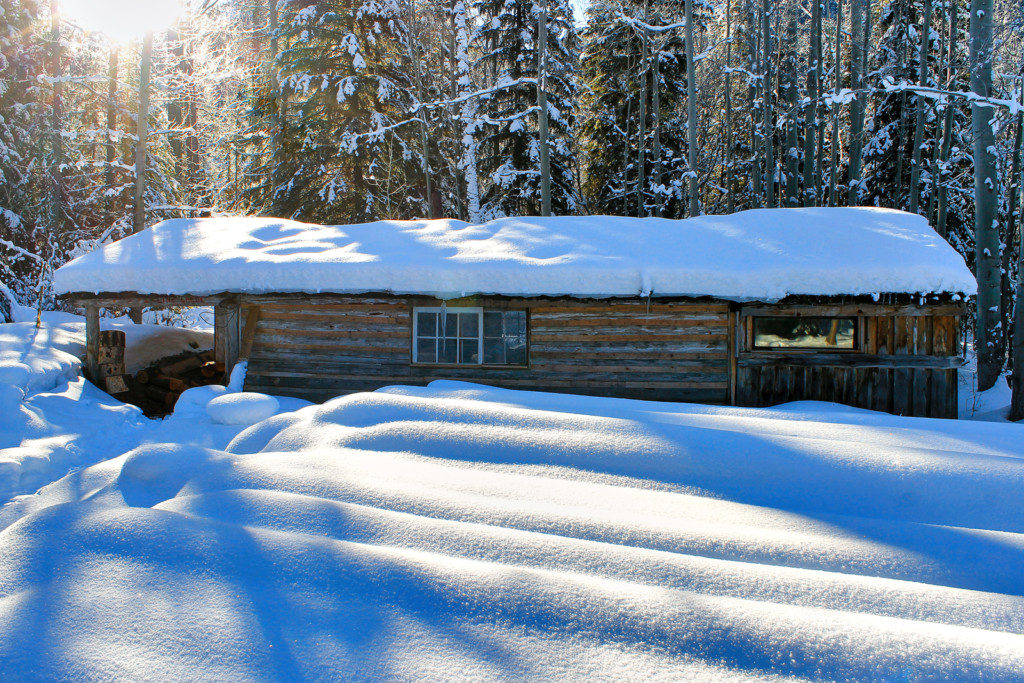 The Woodland Walk Trail, located in Burke Mountain, Coquitlam, is a quick and easy one. Last February, my sister Sonya, our dog Skeena, and I ventured out to complete a loop. It was a sunny day with low-lying fog in the trees; this phenomena created magical curtains of light. Immediately, the romantic in me thought ‘holy crap! I’m in a fairy tale!’. The pragmatist in me knew I had to get home and google what was going on.

Perspective: I saw magic.
Truth: I saw a false convergence caused by crepuscular rays streaming through the fog/mist. 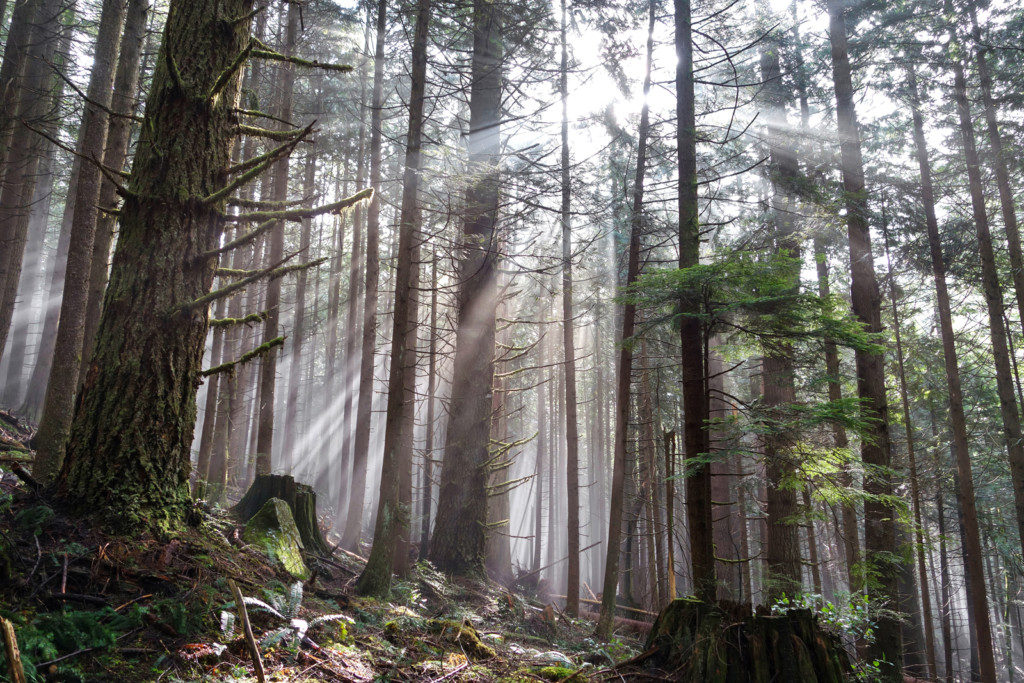 Ryan and I spent 4 days on the island during the end of storm season, courtesy of an Arc’teryx Ladies Night I attended in 2015. It was our first time on the west coast of Vancouver Island and, pardon the pun, we were blown away. 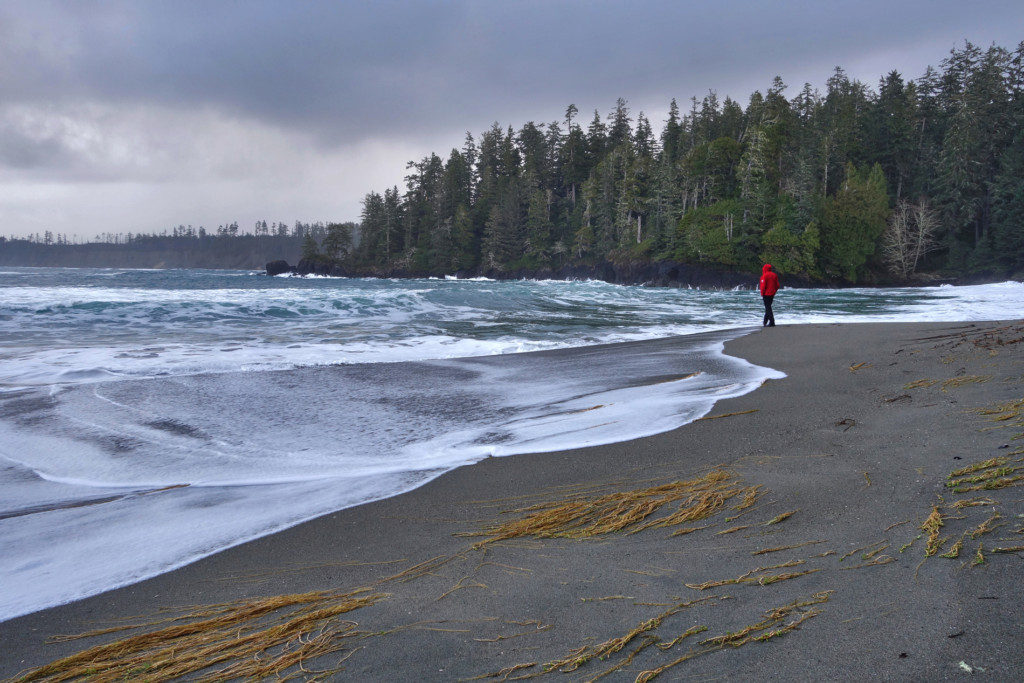 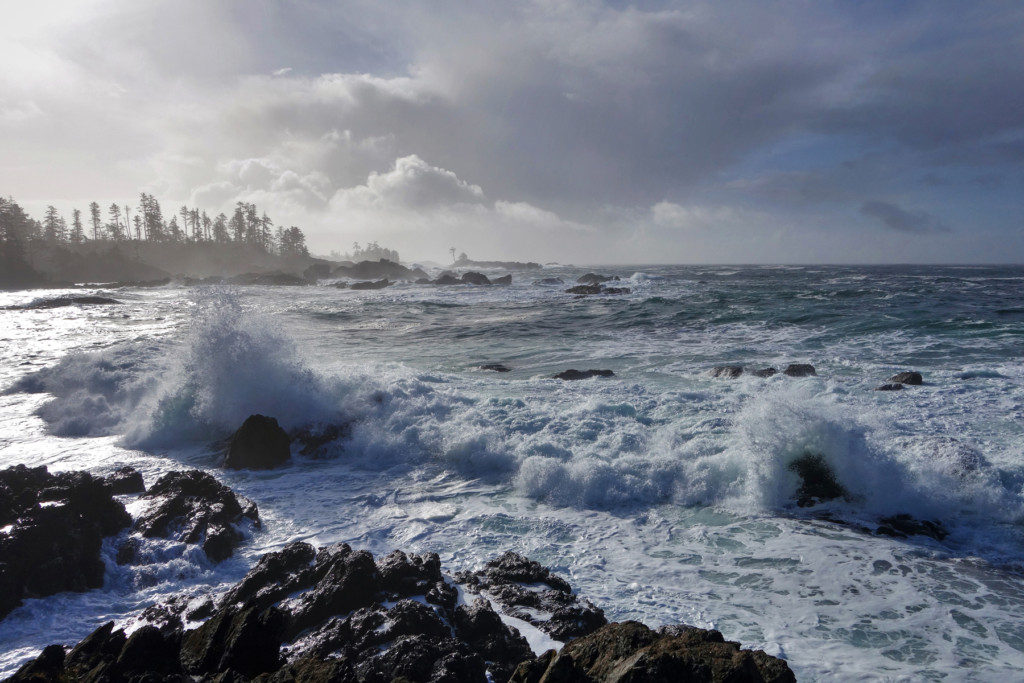 In April, during Easter long weekend, Ryan & I spent a night on Burke Mountain. I may be kicking myself next Easter for saying this, but we were shocked at the lack of traffic on the mountain for a long weekend. We had the south summit to ourselves, witnessed an amazing sunset, and spent a cozy night next to the alluring Coquitlam Mountain (near future goal). 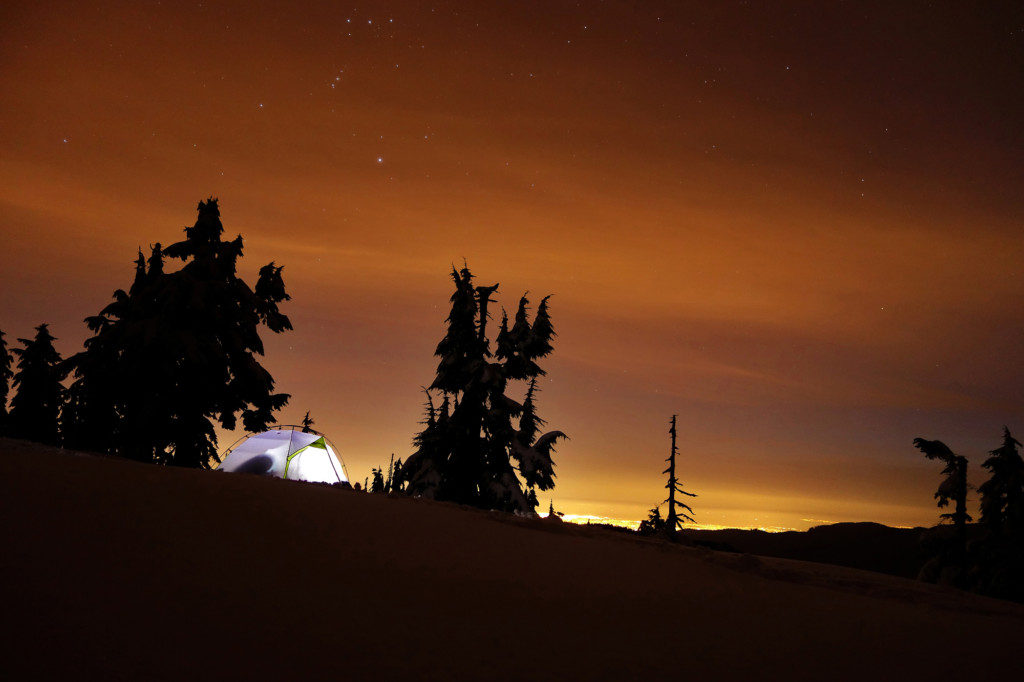 This was an almost-failed summit. The value of this trip was in learning to push forward and overcoming a strong sense of self-doubt. Near the end of May, Ryan and I headed up Mt. Ronayne for an overnight trip. Long story short, we turned back from the summit on day 1 and pushed ourselves to reattempt on day 2. 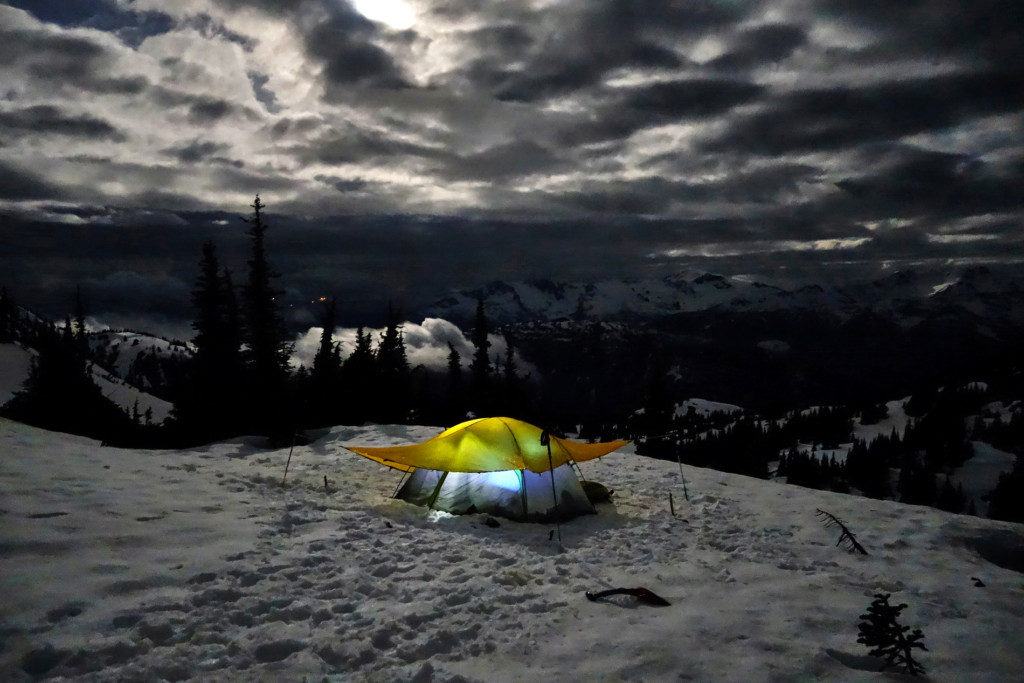 Note: Mt. Ronayne is not well-known. It is not found in any guidebooks and there is not a lot of information online. It is not a commonly frequented mountain and it is considered a route, not a trail. If you choose to explore the area, proceed with caution and familiarize yourself with the details (see above link).

The Summer Solstice marks my Mt. Kilimanjaro anniversary; Ryan and I try to re-live the experience of summit night by hiking to a hut/cabin and attempting an overnight summit somewhere nearby. In 2015, we hiked to Little Diamond Head, located in Squamish, BC., and we had hoped to do it again. With a much heavier snow year and a lot of trail-breaking, we turned around at the saddle and headed back to the hut. Our short hike up to the saddle near midnight was absolutely beautiful. 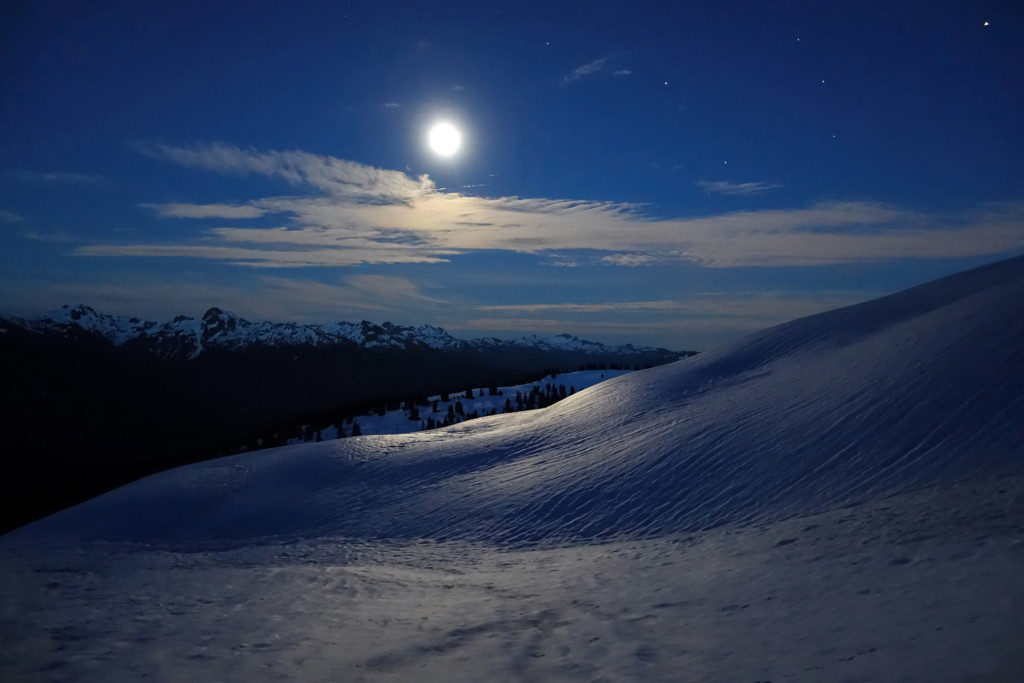 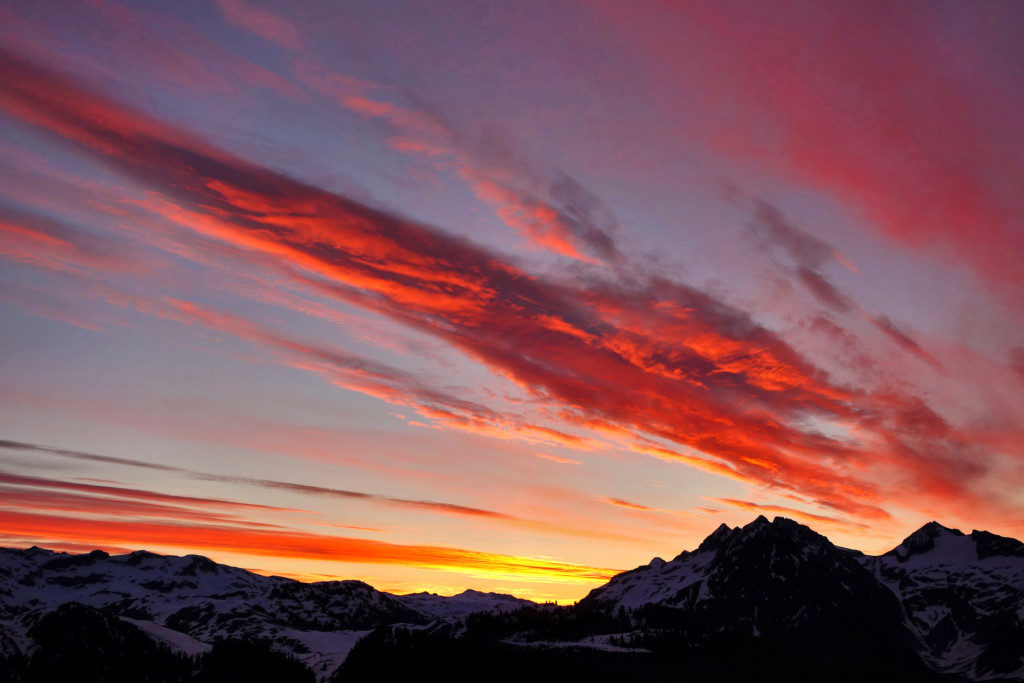 In July, Ryan and I headed to Priddis, AB. to attend a friend’s wedding. Afterwards, we spent a few days driving along the Trans Canada Hwy, Bow Valley Parkway, and Icefields Parkway. We made frequent stops and visited touristy destinations, including: Emerald Lake, Natural Bridge, Johnston Canyon, Peyto Lake, and many more. On one of the days, we met with a friend, who has a fantastic hiking blog, who took us up Little Temple.

During this trip, we experienced a small taste of the Rockies over the span of a few days. I love the coastal mountains, but spending 5 days dwarfed by giant peaks has swayed me over. When it comes to oceanfront rock with coastal forests and steep water-carved drainages VS. limestone, larch trees, giant falls, and broad glacial valleys, the Rockies > Coastal mountains. 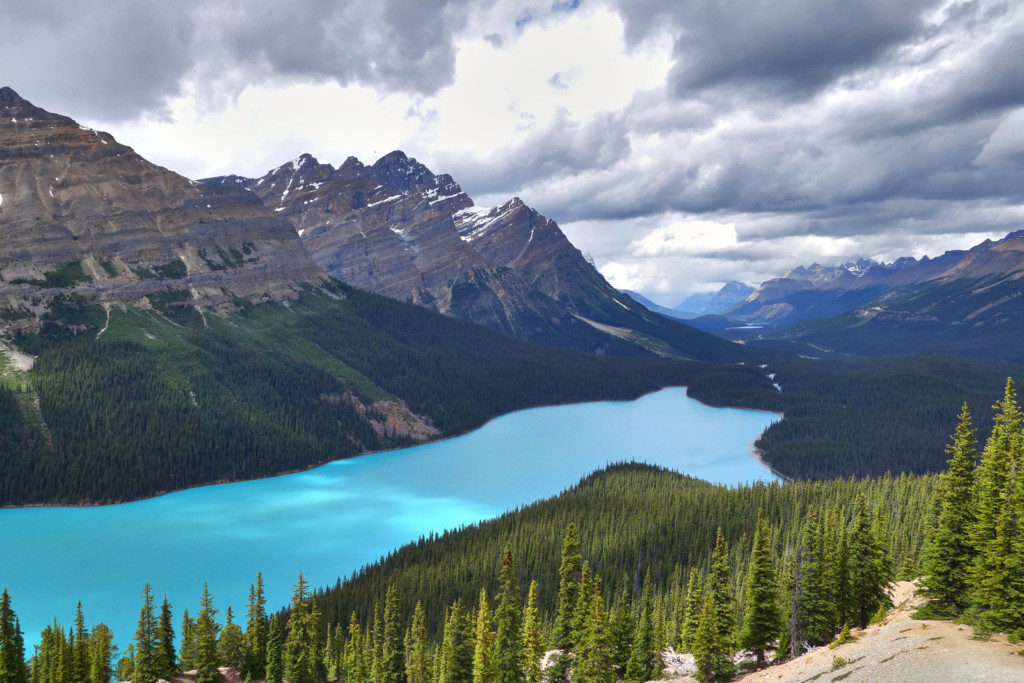 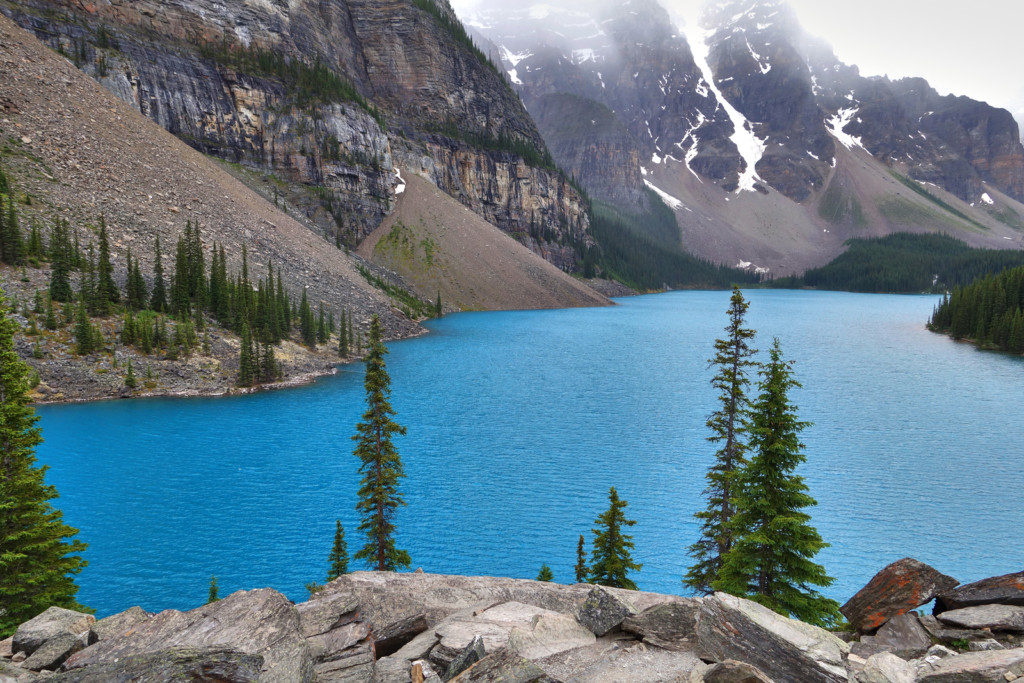 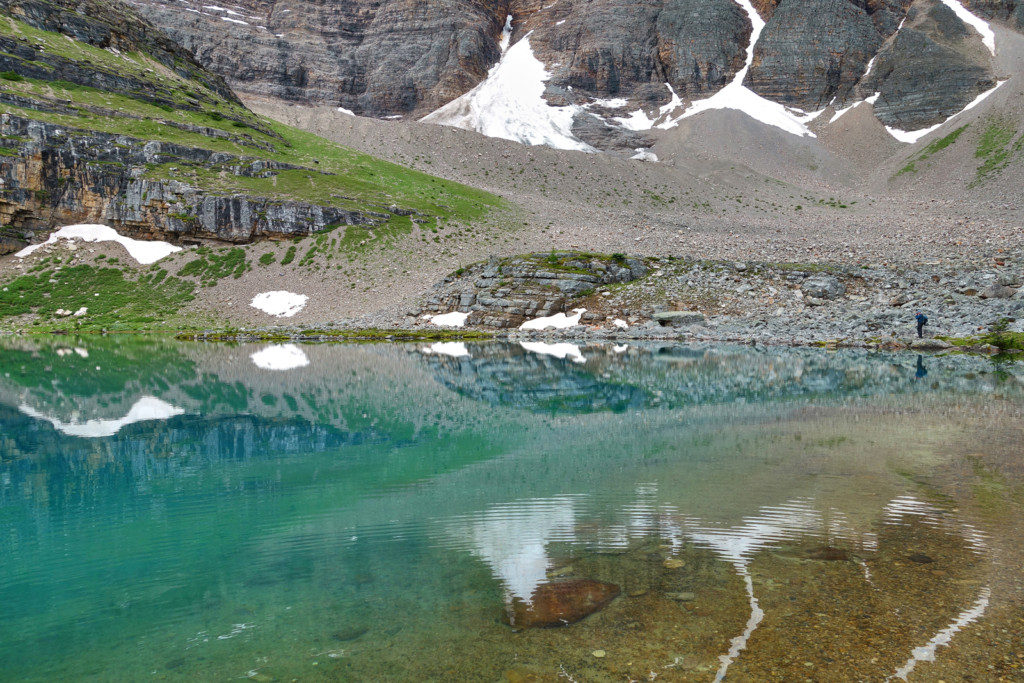 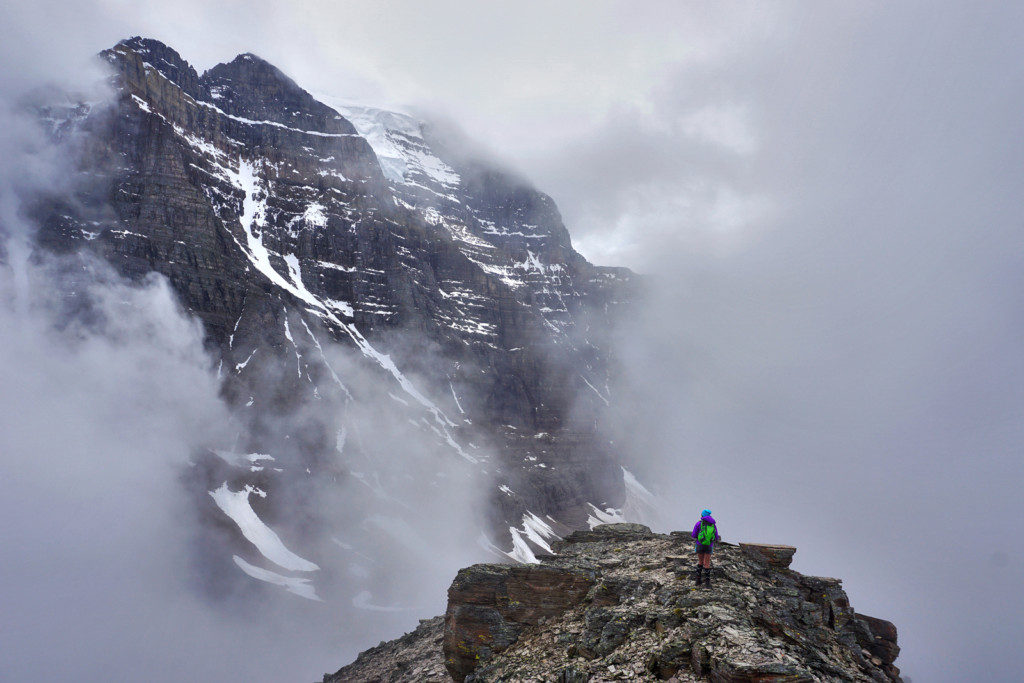 On our annual trip to Lake Lovely Water with the North Shore Rescue team, during August long weekend, we made plans to ascend Omega Mountain. Four us completed this trip, and I’m happy to share this was my first technical summit. We crossed a glacier, used a hand-line on the way up a steep gully, and rappelled on the way down. The views were absolutely amazing.

My favourite part of the trip wasn’t the king-of-the-world views from the summit of Omega, it was the lakeside strolls, paddles, and relaxation, and getting to know the North Shore Rescue team members outside of the chaos that can be search and rescue. 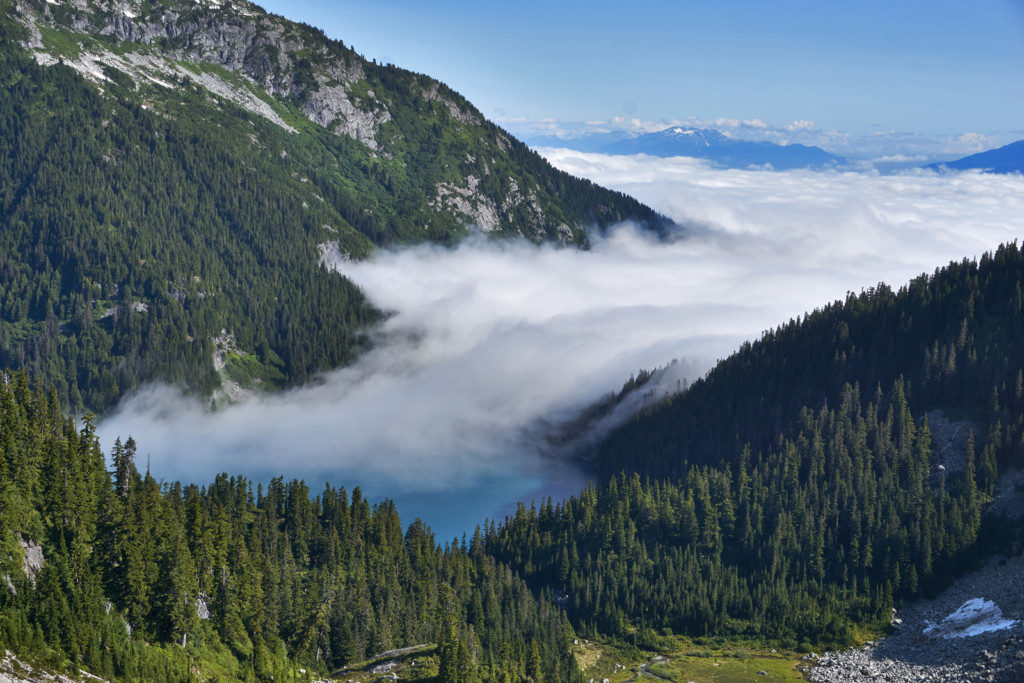 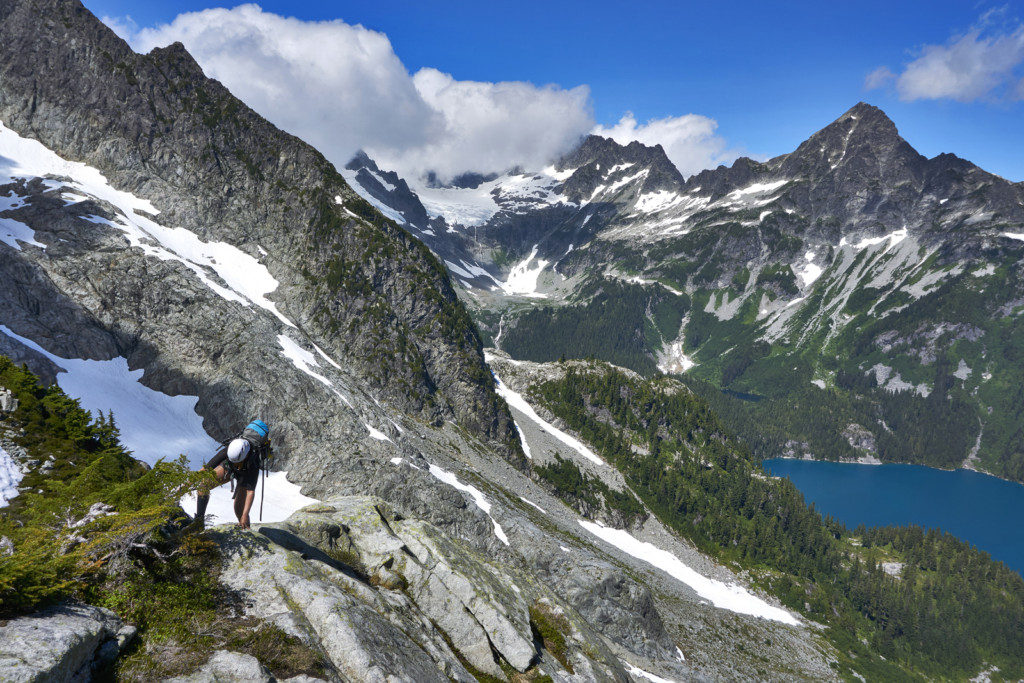 This was a fun twist on a very well known and popular area. Everyone knows about Garibaldi Lake, Panorama Ridge, and the Black Tusk. How many have heard of the neighbouring mountain to the north? In August, Ryan and I hiked to Empetrum Peak via the Helm Creek trail. It was a long, but mellow day trip. We lost sight of all fellow hikers shortly past the campgrounds – this doesn’t happen too often in the Garibaldi Provincial Park. 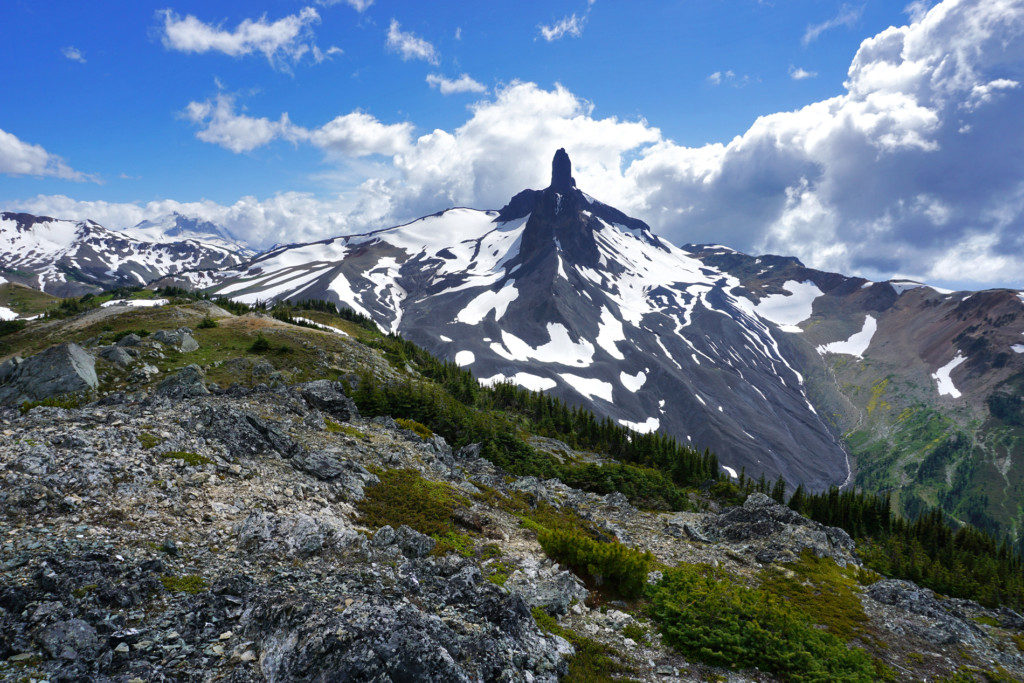 Towards the end of Summer, to celebrate a milestone birthday, Ryan and I spent 1 week in my most favourite place in BC, the Shulaps Range. We’ve been here several times before, when visiting an old jade mine area via Jim Creek, and hiking up to the high ridge.

We spent a few nights camping near Marshall Lake, a few nights higher up in the alpine, and a night at the Little Gun Creek rec site. 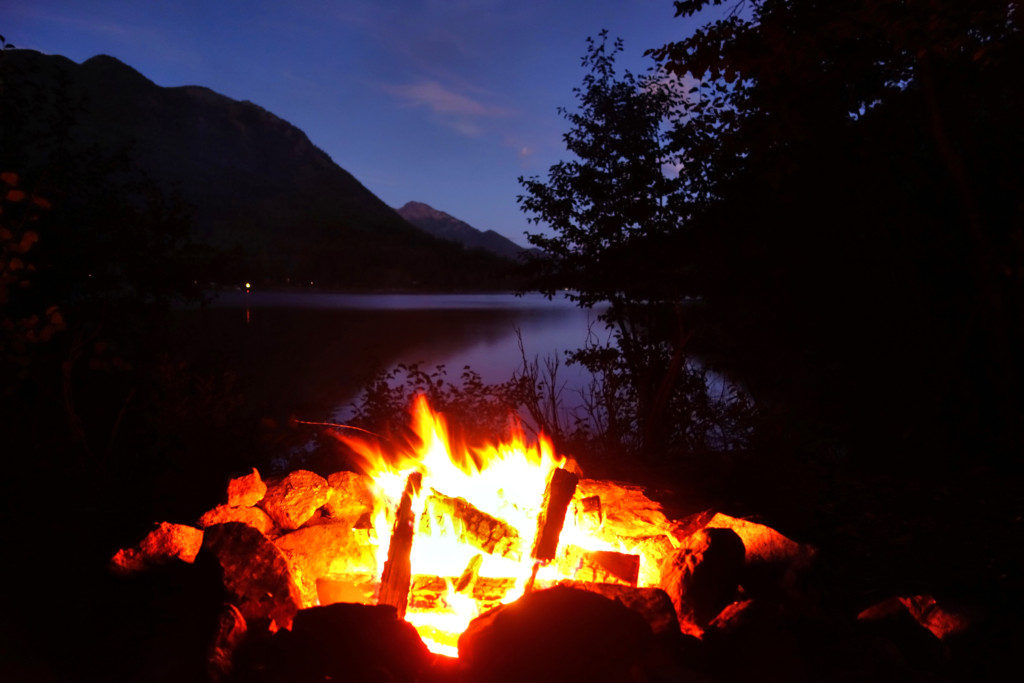 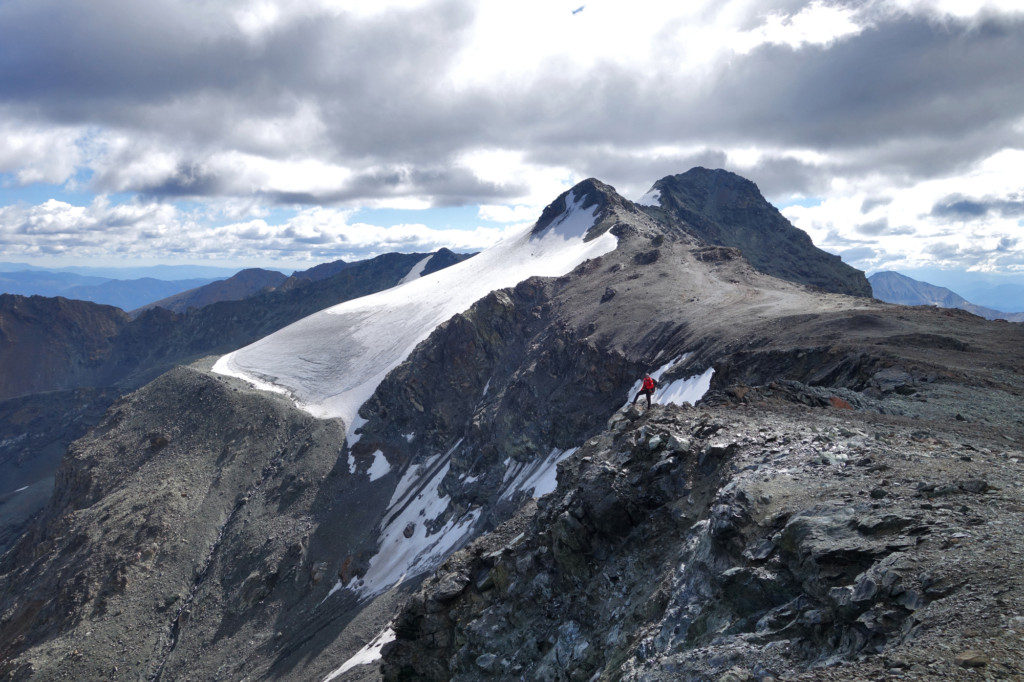 We hiked to Blanca Lake in October and lucked out with brilliant Fall colours – this pretty much made the trip for me. Blanca Lake is a serious gem, located in Squamish, BC. You wont find too many people out here, even on a nice day. The access was easy enough with a high clearance 4WD, the lower and upper meadows were breathtaking, and the lake and surrounding tarns were unreal.

Personally, I thought the views were postcard worthy. 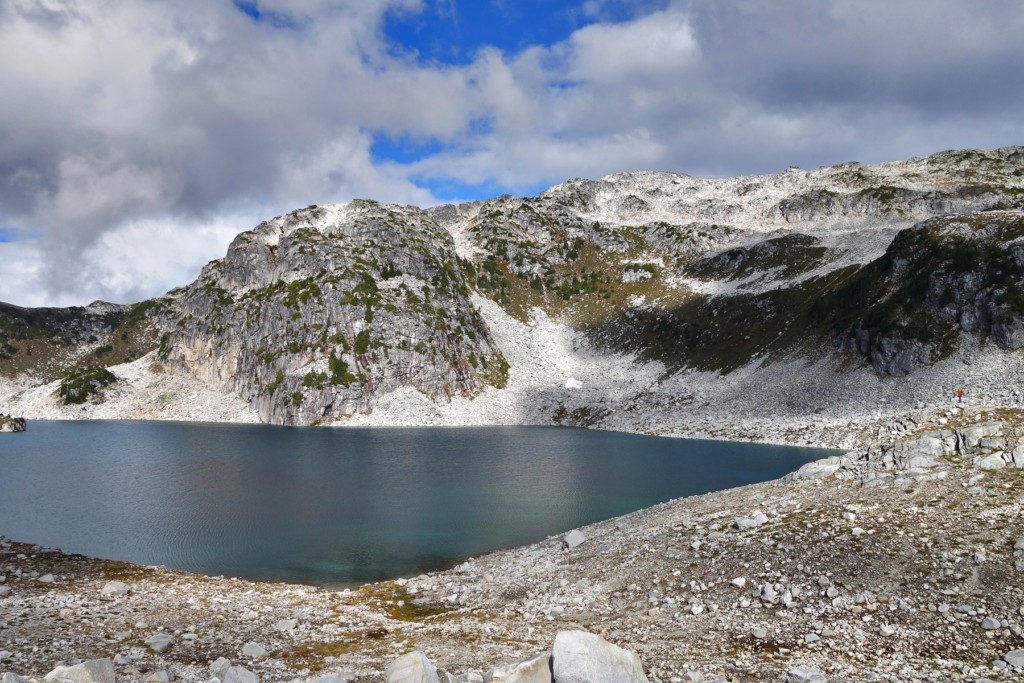 As I shared above, this year, I celebrated a milestone birthday. On my birthday, Ryan surprised me with a helicopter ride to a local destination of my choice, where we enjoyed lunch and some birthday cake. I can’t begin to describe how lucky I felt to share this adventure with my best friend. 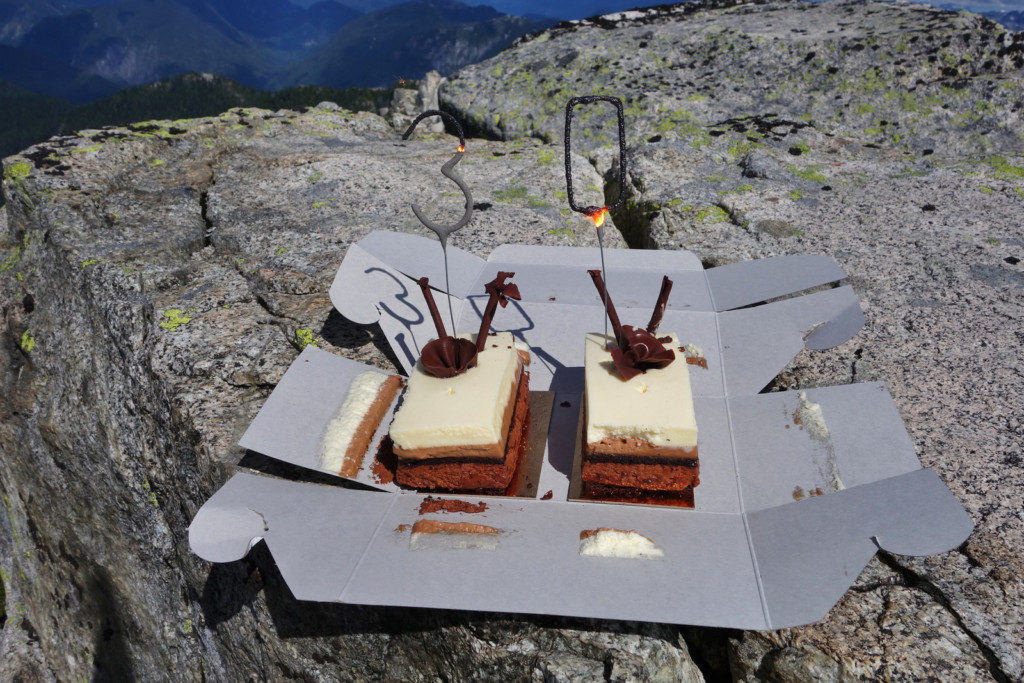 …And that’s a wrap. I’d say we had a pretty solid spin around the sun, on to the next one! What are your plans for 2017? Check out the trip planning tool Ryan & I created for your upcoming adventures! Happy New Year 🙂